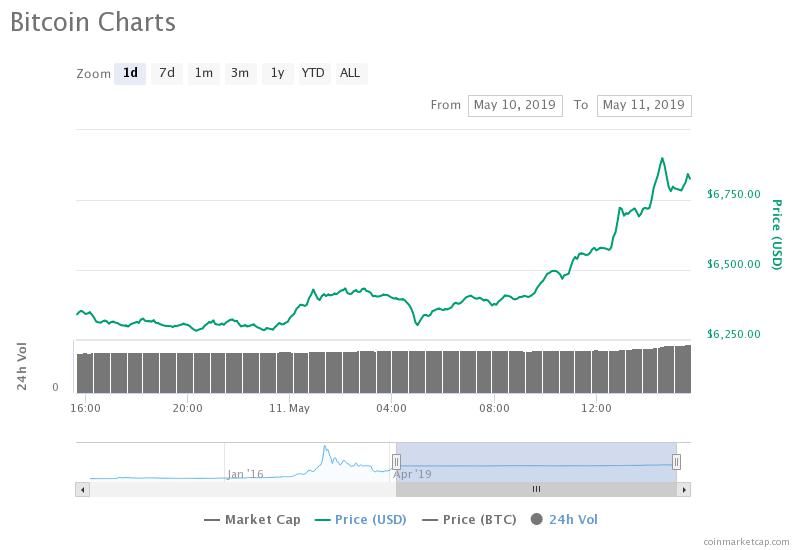 By CCN: The bitcoin price has climbed to $6,964 on the day’s peak in major markets like the U.S., recording a staggering 9 percent rise within 24 hours, bringing its one month gain to 23 percent and fueling the crypto market.

Traders were initially cautious about the near-term price trend of bitcoin as large resistance served as a potential roadblock for the asset to continue its upward momentum.

The bitcoin price has recorded a 9 percent gain in the past 24 hours (source: coinmarketcap.com)

What’s Next For Bitcoin?

On Thursday, Adaptive Capital head of research David Puell stated that the bitcoin price has moved from a parabolic stage to vertical, raising the possibility of the bitcoin price rising from $6,300 to over $7,000.

“Price is not only parabolic, but vertical now. Shorts are still far from getting fully squeezed. $6.4k may activate longs from late trend traders, setting up the perfect blow-off to,” Puell said.

Following the break out of bitcoin over $6,000 and the substantial increase in its price on the day, global markets analyst Alex Krüger ‏said that bitcoin is now in a bull market territory, with resistance found at $7,000 and $8,000.

A potential entry into the $7,000 to $8,000 range, which would allow bitcoin to recover to July 2018 levels, would require a strong stimulus to further fuel the momentum of the dominant cryptocurrency. The valuation of the crypto market increased by more than $10 billion on the day (source: coinmarketcap.com)

One possible catalyst of the bitcoin price in the near-term is a potential short squeeze that could lead the liquidation of short contracts to add to the momentum of BTC.

Willy Woo, the founder of WooBull.com, explained the process in which a short squeeze occurs, mostly when a chain reaction of liquidation leads the price of the asset to experience a vertical movement.

All this happens without any on-chain activity. As it’s an exchange driven game, no real investors are buying into the rally. Get the popcorn out, let’s see if the squeeze completes…. Look for the Bitfinex shorts (red line to drop) and the BitMEX funding rate to go positive.

4) A tidal wave of buys cascade through the orderbooks, a chain reaction, the price goes vertical.

5) Whale payday. The whales that bought up the market sheparding the price up now dump their positions at profit.

6) Blow-off. The price comes down to its organic levels.

Although the bitcoin price has already recorded a large gain since early May, a short squeeze could still allow the asset to test the $7,000 to $8,000 range, which most technical analysts dismissed prior to the asset’s clean break out of $6,000.

On the fundamental side, Barry Silbert, the founder and CEO of Digital Currency Group, said that the trading volume of the Bitcoin Investment Trust (GBTC) surpassed $50 million on Friday, becoming the most actively traded stock on OTC Markets.

GBTC is primarily utilized by accredited investors to invest in bitcoin in a transparent and regulated environment.

The steady inflow of institutional capital in the past 12 months as seen in the 2018 annual report of Grayscale and the newly released survey of Fidelity suggests that a growing number of accredited and institutional investors are committing to the market.

“According to the survey, about 22% of institutional investors already have some exposure to digital assets, with most investments having been made within the past three years. Four in ten respondents say they are open to future investments in digital assets over the next five years,” the report of Fidelity Digital Assets read.