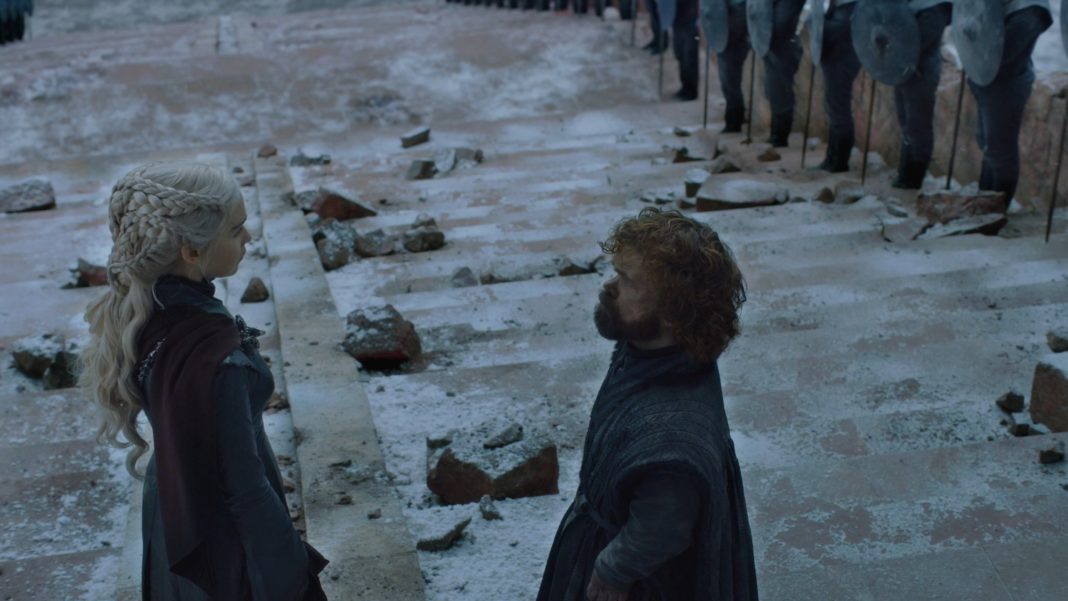 By CCN: Major spoiler alerts follow. A growing movement of Game of Thrones fans has already decided the final season should be re-made. No word on that from HBO or the show’s producers, but the final episode did happen this evening. We opened with Jon Snow defending “innocent” members of the Golden Company. They were about to die at the hands of newly minted Queen Danyeares’ primary general, Greyworm, who is shortly named the Queen’s Master of War.

Out With the Old, In With The New

Ashes rain over the first quarter of the episode as the Mad Queen addresses her troops. Dany speaks of “freeing” the people of Kingslanding, although at this point there aren’t many left. Arya Stark, who we last saw riding off on a white horse at the end of the last episode, a cold-blooded look on her face, is present for the speech.

Tyrion Lannister appears by the Queen’s side, only to be told he is a traitor for previously having freedom his brother Jaime, hoping Jaime could convince Cersi to back down. That gambit failed, as we later learned, and Tyrion resigns his position as hand to the Queen, saying:

“I freed my brother, and you slaughtered a city.”

Tyrion is taken away, presumably to be executed.

Arya tries to warn Jon Snow that he is in danger, but Jon, who insists that Dany is “everyone’s queen now,” has no reply.

Jon Snow visits Tyrion in his prison cell, where he awaits execution, and asks about the afterlife. Jon, who has died before, tells Tyrion there is no afterlife.

Like Arya, Tyrion tries to warn Jon Snow that Dany is far from done. He then tries to convince Snow, as Virus did before, that he should be King of the Seven Kingdoms. He also lays out his logic for why Jon Snow is probably not safe around Dany.

“Everywhere she goes, evil men die, and we cheer for it. And she grows more powerful for it and more sure that she is good and right. She believes her destiny is to build a world for everyone. If you believed that if you truly believed it, wouldn’t you kill whoever stood between you and paradise?”

Jon has a reply this time.

“Love is the death of duty.”

“Sometimes duty is the death of love. […] Do you really believe I’m the last man she’ll execute? Who is more dangerous than the rightful heir to the Iron Throne?”

Finally, Jon Snow admits he doesn’t care. We find out soon that he really does.

Tyrion desperately begs Jon Snow to reconsider his support for Dany’s new era. He brings up the fact that the Stark sisters, now more elevated than ever, are unlikely to support Dany, which could find them executed as well.

The Dragon Queen Assumes Her Throne, Surrounded by the Shambles of the Old World

Nearly everything around the Iron Throne, made of one thousand swords, was destroyed, but it sits undisturbed. Dany is taking it in for the first time when she finally has a moment to speak to Jon Snow, her lover, nephew, and the only other person with a legitimate claim to that very throne. Jon Snow has a small hurdle before meeting the Queen. | Source: HBO

Jon Snow confronts Dany about executing men after the battle. He brings up the issue of collateral damage, all the children and women who were burned. She justifies all of it and further refuses to grant any leniency to the last of the Lannisters. She says:

“We can’t hide behind small mercies. The world we need won’t be built by men who cling to the world we know. […] It’s not easy to see something that’s never been before.”

Jon Snow asks her how she knows it will be good. She says she simply knows what is good, the penultimate arrogance of a power-hungry Westeros royal fully on display.

Shocking Twist: Dany Dies by The Sword of Her Kin

The rightful heir to the Iron Throne once again pledges allegiance to Dany as he kills her, in a shocking twist. The move is so subtle you truly don’t see it coming. The woman felt no threat from Jon Snow, but he snuck a blade into her all the same. It will be interesting to see how the rest of the world views his act since it’s only treason if you agree that she had taken the throne legitimately.

The last dragon shows up, apparently having sensed the death of his mother. Quite unhappy with the new Queenslayer, he is more distraught than angry. Jon Snow appears ready to die, but the dragon redirects his flames at th Iron Throne itself, melting it into a pool of molten ore.

The message seems to be there will never be another Iron Throne. Just like a loyal dog, Dracarys carries his master and mother off into the sky, tired of the world of men.

Although Dany is dead, Greyworm hasn’t forgotten the treasonous acts of Tyrion Lannister. He brings him before a sitting council of other royals, including the princess of the Iron Islands, who insists she remains loyal to the dead monarch.

so all the unsullied and the dothraki just casually forgot that their queen was murdered and drogon saw it happen and was like.. k? #GameOfThrones

The Unsullied seem to be rebelling against the obvious new status quo, and Greyworm insists that Jon Snow and Tyrion Lannister must be put to death unless the realm wants problems with the Unsullied.

The lords and ladies begin to decide on who should be the King and Queen.

The idea of democracy comes about, and several of the royals laugh it off. Tyrion Lannister has a minor claim to the throne but says:

“Me? An imp? Half the people hate me for serving the Queen, the other half hate me for betraying her.”

Bran the Broken Pardons His Brother and the Imp

With a stirring speech, Lannister then proposes Bran, Arya’s brother, and the “Three-Eyed Raven,” a power which enables him to know anything about the history of Westeros. Lannister then says that rulers of the Seven Kingdoms must be chosen from now on, by the lords and ladies.

Bran accepts the responsibility of the obliterated Iron Throne, saying:

“Why do you think I came all this way?”

Bran receives the support of all the lords and ladies present.

Sansa tells her brother that the north is to remain an independent kingdom, as it was before. This makes “Bran the Broken” the “Lord of the Six Kingdoms,” and essentially means that one family, the Starks, rule the whole world.

Bran does Tyrion a favor and chooses him as the hand of the king. Greyworm demands justice, but Bran won’t back off. Jon Snow also escapes the executioner’s blade, going back to the Knight’s Watch.

Often, we think of television as much more expansive for storytelling. But this final episode of Game of Thrones leaves numerous questions unanswered. The show could have gone on for ten more episodes and fully detailed every such question. Many would have tuned in.

Apparently, the Unsullied and the Dothraki come in unlimited numbers.

Instead, we’re left to believe that the most unlikely of the royals in Westeros has become Queen, while his itinerant older sister rules an independent kingdom. This situation doesn’t seem like one that can last forever, especially since rulers will be elected moving forward. Future leaders are sure to question the validity of the North’s “independence.”

Everyone’s favorite hero, Arya Stark, announces she’s heading “where all the maps stop.” Surely it would have been preferable for her to add to her own laurels by whacking the Mad Queen as a follow-up to her slaying the Night King.

Breanne, who was knighted by her lover Jaime Lannister, makes a point to update his records, making clear that the man “died protecting his queen.”

Next, Tyrion finds out that he’s been written out of the history of Danyeras, and Bran addresses his first council. The daily business continues, with the new master of coin committing to rebuilding the brothels first and foremost.

We end with Jon Snow exactly where we first met him, condemned to a life on the watch. He reunites with some old friends and his pet wolf.

All in all, like most good stories, the viewer is left wanting so much more. As we said at the beginning of this summary, fans are already clamoring for some justice. Most of HBO’s greatest shows have ended after seven seasons, including The Sopranos and the Wire. Both of those shows also left us wanting more. However, the ending to Game of Thrones, which may be underwhelming and unsatisfying, was certainly less annoying than that of the Sopranos. That much we can say for it.