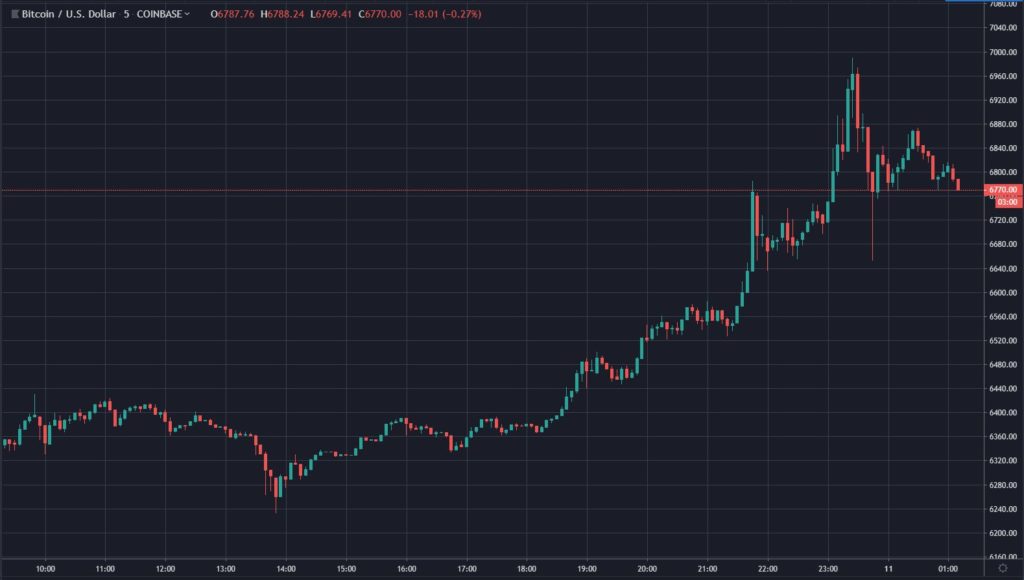 No. Way. Bitcoin (BTC) just hours ago touched the $7,000 price level in a brief spike. While the cryptocurrency has since fallen slightly, returning to $6,800, it remains up by over 7.5% in the past 24 hours and well over 50% in the past month. For now, it seems that bulls are back, and are thirsting for the blood of bears. (It is important to note that altcoins, from a BTC sense, have fallen dramatically, as investors liquidate their non-BTC stashes for the lead asset.)

As you’d expect, analysts have been all over these recent moves, trying to determine what’s going on, what could happen next, and what will drive the moves they foresee.

In a recent Twitter post, analysis “CryptoGainz” explained that there is an array of signs hinting that BTC won’t take a breather here. Firstly, there remains an open interest of $690 million worth of BTC positions on BitMEX, all while position funding has reached -0.09% for shorts. This, as Alistair Milne explained last week, could imply that a short squeeze is on the horizon.

As industry researcher Willy Woo remarks, if a short squeeze comes to life, BTC would see a “blow-off”, whereas prices explode within a short period of time, before a retracement. This is because such squeezes require short-sellers to “buy back at market price,” creating instant buying pressure.

What’s more, the “ask side” is “thin AF”, which means that minimal buying pressure will push the price even higher. And, most importantly, Bitcoin continues to break about key levels of resistance, namely $6,000, $6,400, and potentially $6,700-$6,800 most recently, in a sign that bulls do have both hands on the steering wheel… for now.

Popular analyst Alex Krüger agreed with this sentiment. He explains that BTC has entered “bull market territory”. While he did make it clear that a short-term pullback is likely, as “intraday blow-off top(s)” often result in retracements, he notes that Bitcoin is finally entering key zones for bulls after 2018’s 80% drawdown. Even more importantly, the hourly volume seen on BitMEX earlier today was the “second largest ever after September 5th, 2018,” according to Krüger — a sign that speculative interest is returning en-masse and is likely to cause further volatility.

And as trader RedXBT points out, an indicator he was working on (note: little data could be found about the intricacies of this indicator), which signals tops and bottoms (trend reversals) has yet to print a “sell”, hinting that there is further room for the cryptocurrency to run.

Some have been a tad warier though. Crypto White Walker recently noted that Bitcoin’s chart from December to now looks awfully like a textbook parabolic curve formation, which is always followed by a rapid downturn after a peak.

And as PlanB, a popular quantitative crypto analyst, recently pointed out, BTC is currently trading well above the value that his stock-to-flow model, which has acted as a resistance in previous post-bear market recoveries, assigns to the asset. In fact, per his model, Bitcoin’s fair value sits at $6,250, but BTC is currently sitting 7% above that.