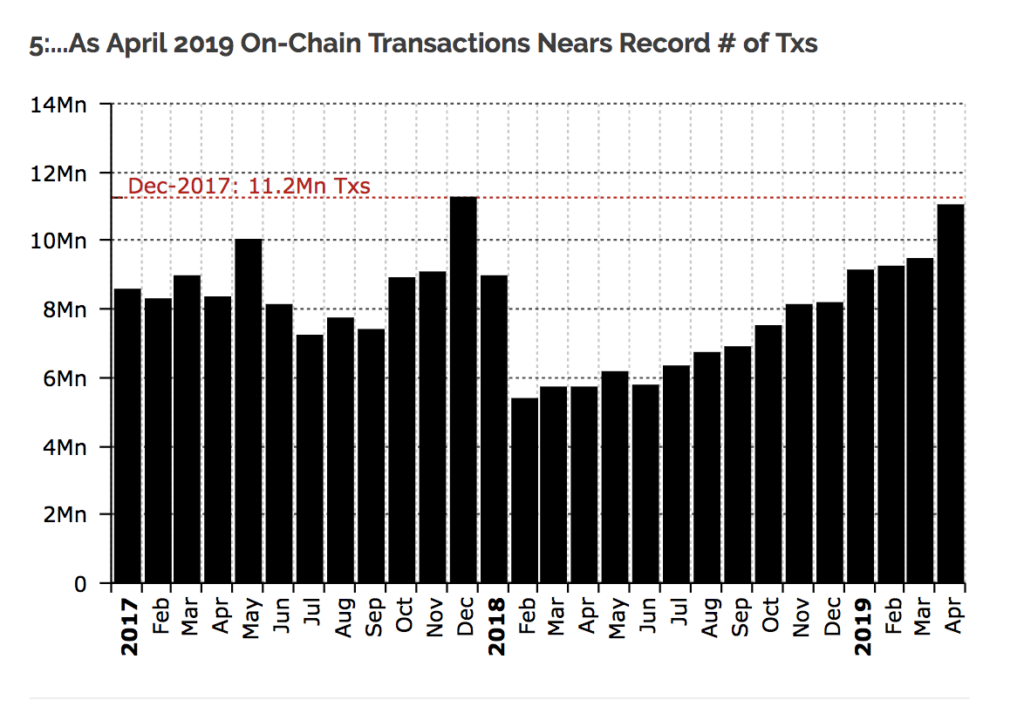 In November last year bitcoin broke from a trading range of $6,800 to $6,250 that had been held since mid-September, and began its descent to the $3,200 bear market low. The break coincided with the Bitcoin Cash brouhaha and which was blamed by many for triggering the collapse. Bitcoin has recaptured and, for now, surpassed those levels.

The fact that the price has broken
through to the top end of the $6,000s is impressive, given the substantial resistance
out in place by last year’s rangebound trading.

There may be some pullbacks from here
but assuming momentum continues, then the next points of contention could come
into view at $7,300, $8,500 and $9,950.

Finally there’s the halving. The best time to buy bitcoin is around a year before the block reward halving takes place, as seen in the chart below from Byzantine General. The reward drops from 12.5 to 6.25, slowing BTC issuance.

Fidelity Investments, one of the largest asset managers in the world, will turn on trading for institutional customers “within a few weeks” it was reported by Bloomberg, via its Fidelity Digital Assets service.

With $2.4 trillion in assets under management, Fidelity doesn’t just bring credibility to the crypto world, it brings the institutional investors too.

In a similar vein, the purported entry of two of the big four US brokerages into bitcoin trading is massive.

The news started to leak out when evidence of TD Ameritrade testing bitcoin trading emerged, followed by reports confirming the same for E*Trade, again by a well-sourced Bloomberg report.

4. Money on the sidelines

Then there’s all the money that’s been
sitting on the sidelines looking in.

Leaving the institutions to one side,
the fallout from the bear market may have introduced many to the risks
associated with investing in such a nascent asset class, which is a sensitive
way of saying a lot of people got their fingers burnt.

But for every one of those, there will
be others who either sold near the top or on the way down and have been looking
to get back in when they could see a bottom forming.

Turns out the bottom was reached in
December last year at $3,200. The second-time-round investors are coming back.

5. Fear Of Missing Out

Which brings us neatly to The Fear of
Missing Out (FOMO) a much-observed psychological driver of speculative investing.

We can get a flavour of how this works
when even the chief executives of leading altcoins chip in with their pennies
(or millions) worth.

Here’s some pearls of wisdom from Justin
Sun, the Tron boss, in a tweet today:
“Never too late to buy. The best timing to buy $BTC, ten years ago or now”

What’s surprising about that comment is the
comparison with when bitcoin was priced in pennies to today, from a risk-return
perspective. It is something of a stretch to assign equality to the two entry
points.

And the fact that he  doesn’t say “buy Tron” alongside BTC is
striking. Bitcoin dominance has been rising, currently standing at 58.4.

Bitcoin had been sucking the air out of
the altcoin market because it is the main trading pair, although that has
changed today as alts join in the rally.

On Monday morning when the mainstream
media picks up on the gigantic strides made by BTC, expect more FOMO.

The reality is dawning on at least some
of the sceptics, or those of a previously agnostic view, that bitcoin is for
real; it’s not going anywhere.

Those who bought into the Tulip bulbs
bubble stuff are now wondering if they were wrong.

Bitcoin’s return from the sudden death
that was meant to have been its fate, makes the case for its future, either as
store of value comparable to gold or as a means of exchange, a more powerful
story for those previously undecided. Barry Silbert’s Grayscale made a clever
play on this with a cheeky “Drop Gold” ad campaign on social media.

The development of a Facebook Coin has
been greeted with at least three responses from the crypto community and others.

First there’s the irrelevance school of
thought that sees it just as a “virtue token” for the FB economy that will be
sealed off from “crypto proper”.

Then there was the idea that it could be
a bitcoin killer, because Facebook has a habit of levelling all before it.

Lastly, and more accurately perhaps, there
is the notion that it will lift all boats.

This latter position has a truer ring to
it. If the reports to date turn out to correct – especially the bit about listing
on select crypto exchanges (maybe not Binance, but Serena’s Coinbase investment
is looking good) – then Facebook Coin could potentially open crypto to two
billion plus people around the world, across all Facebook’s properties.

Our eighth point could have been crowbared
in with Facebook but is probably best treated separately – Nike getting into
crypto.

For those that don’t know, Nike filed a
trademark for “Cryptokicks” on 19 April.

Nike is a company known to have its
finger on the cultural zeitgeist, and from the text of the filing it looks like
it is going to create a crypto currency that will target collectibles.

The footwear and apparel company talks
about “providing a digital currency or digital token for use by members of an
online community via a global computer network; facilitation of financial
transactions using unconventional currency systems and bartering” as well as “crypto-collectibles
customization for hobby or entertainment purposes”.

Collecting shoes is a thing, and it does
not take much of a leap of the imagination to see Nike selling its one-off special
editions exclusively through the medium of a “cryptokicks” token. Cryptokicks
could be huge in a different, cooler, way to Facebook Coin.

9. The bitcoin market is maturing and resilient

That is the conclusion to be drawn from
the fallout from first the Bitfinex/Tether mess and the threat to both from the
New York Attorney General and, secondly, the hacking attack against the Binance
exchange.

In previous times both of those events
could have bordered on being catastrophic for prices, but after a little dent,
the bitcoin price shrugged off the noise and carried on doing its thing.

There was a time when the gathering of
the great and the good at New York Blockhain Week would see a spike in the
bitcoin price. Looks like those happy days may be upon us again.

I
was reminded of such when a flurry of emails started dropping for party
invites, notably the Ethereal 2084 Afterparty taking place from 11pm to 3 am
tonight at Brooklyn’s trendy Gran Torino, with music from Demedusa.

New
York still matters as the home of the world’s premier capital market and as the
trendsetter of a nation, although I’m sure many other locales in the US would
beg to differ on that last part.

Moore
pertinently, Consensys and all the other events of the week, focus the minds of
the financial masters of the universe on the opportunities at hand. Numbers are
way down on last year but it may not be a coincidence that this bitcoin lift-off
has come just now.

In April on-chain bitcoin network transactions neared the all-time high set in December 2017 of 11.2 million, according to Diar Newsletter. And SegWit seems to be working well to hold back fees, they still rose 250% month on month, says Diar.

When the Bloomberg anchor begins the morning show with a
hook about the US-China trade tussle and comments “but I just want to show you
this” – and brings up the bitcoin chart and the price flashing green, it is
telling you what many other equity market participants are thinking.

One of the selling points of bitcoin had been its supposed
negative correlation to the equity markets.

Well, that relationship in evidence this past week, certainly
seems to have tweaked the collective consciousness of mainstream investors as
they notice – either in their newspaper or on a computer screen – that when the
equity markets were pointing lower, bitcoin was doing the opposite.

That was another reason for those not already invested, if
the other 11 above were not enough, for “getting off zero”.