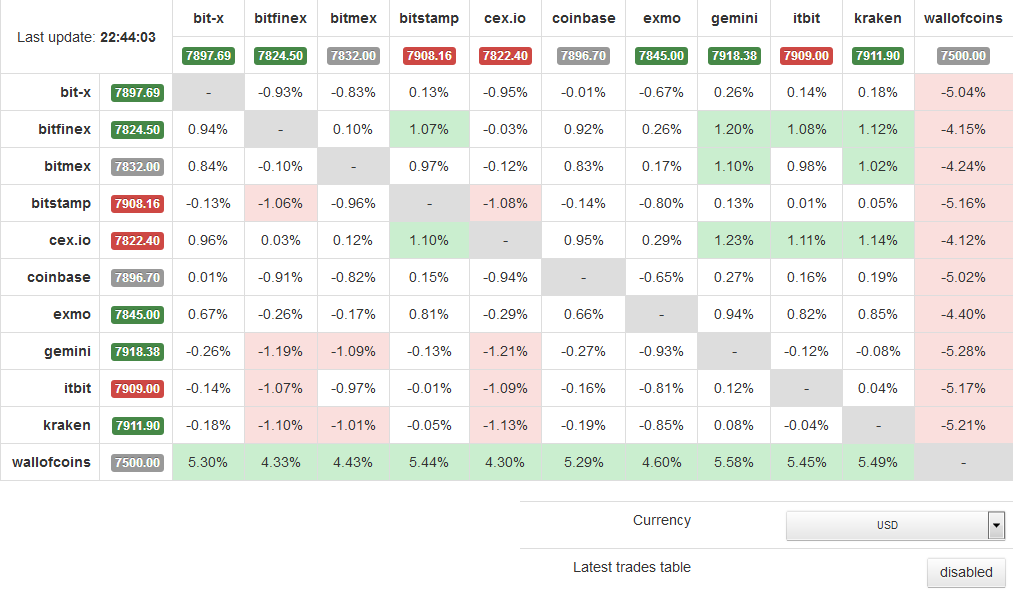 The
Bitcoin Bull Run is already here. However, the bullish forces have manifested
differently on virtual currency exchanges. BitFinex, one of the leading crypto
exchanges, had one of the highest price differences, or premiums, of up to 6
percent compared to other leading exchanges.

Fortunately, the bullish forces are now leveling up across exchanges with premiums on BitFinex wiped out as the exchange turns out to be trading at a discount relative to other liquid ramps. With such a considerable shrinkage, the price difference of Bitcoin on BitFinex and other exchanges such as CoinBase, Kraken, Gemini, ItBit is less than or equal to $100.

For
example, a live Bitcoin markets arbitrage table provided by bitcoinity captures Bitcoin
at $7800 on BitFinex while on CoinBase, Gemini, Kraken, and ItBit Bitcoin is
exchanging hands at $7896, $7896, $7899, $7894 respectively. Although
these prices continue to keep fluctuating independently on each exchange, the
price difference is within the $100 range.

The
reduction in BitFinex’s premium comes after the crypto exchange recorded
massive premiums a few days ago. The trading volume on BitFinex dropped
significantly earlier this month as traders were converting their USDT into
cryptocurrencies and presumably taking them out of the crypto exchange.

Coincidentally,
while BitFinex premium is reducing, Tether’s stablecoin (USDT) maintains its
1:1 ratio to the green back. The USDT token is trading at $1 per coin despite
Tether giving away some of its reserves to cover a gaping $850 million hole on BitFinex’s
financial books.

As
a cryptocurrency exchange that continues to immerse itself in one scandal after
the other, BitFinex has been facing heavy criticism from crypto analysts. BitFinex
recently indicated that it’s conducting an IEO to raise $1 billion with reports
emerging that it has already netted the full $1 billion through a private sale.

However,
the move to hold an initial exchange offering was met with criticism. Ran
Neuner, the host of Crypto Trader at CNBC, pointed out that “this is crazy. A shareholder at BitFinex is
admitting that Tether may not be backed by fiat and is now comparing it to
fractional lending by the banks???”

It
is with this ‘craziness’ that the crypto community is still not appreciative of BitFinex premiums falling to
below half.

For instance, a Redditor noted that even if the premiums were cut by more than half, “USDT is still less than 75 percent backed.” Although the USDT: USD ratio is still at 1:1, the crypto community is flaunting an idea of jumping to other less controversial stable coins such as DAI. However, their failure to outdo USDT is still one of the major concerns. Nonetheless, amidst the falling premiums, BitFinex has reported a profit (net) of more than $400 million.