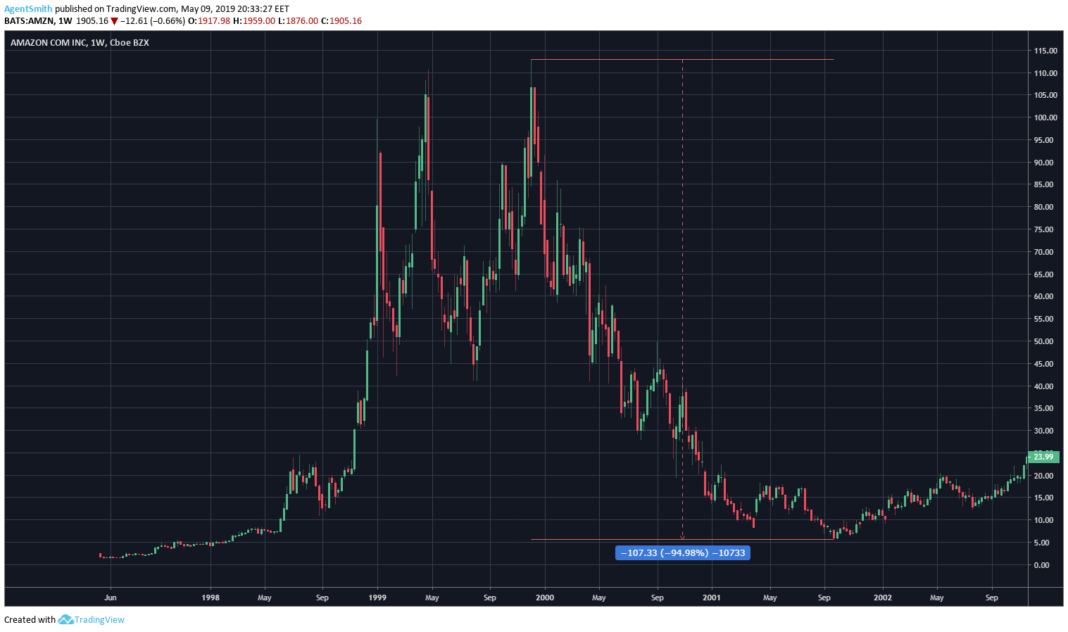 By CCN: Wall Street loves to compare bitcoin to tulip bulbs and beanie babies, but if the stock market isn’t trapped in a devastating bubble then nothing is.

It’s easy to trash crypto in the wake 2017 ICO frenzy. From peak to trough bitcoin lost around 85 percent of its value in 2018. And bitcoin is generally regarded as the safe haven play in the digital currency landscape. Many small-cap coins lost more than 95 percent of their value; others went bust.

That may, however, be a valuable lesson for anyone keeping a close eye on US equities. Stocks are forming an ominous parabolic curve all too familiar with those who’ve been in the markets for more than just a few years.

Are we in the midst of the next mania? It sure appears that way.

History is replete with examples of economic bubbles, going all the way back to Tulipmania in 17th-century Holland. A more relevant and recent example can be found in Amazon stock (NASDAQ: AMZN) during the dotcom bubble:

Amazon stock, despite its fundamental strengths, suffered a brutal fallout from the dotcom crash. | Source: TradingView

The classic bell curve in all its devastating glory. Amazon’s stock price took a 95 percent hit as the dust subsided in 2001. Where have we seen that kind of loss before? Oh yeah. That is one scary-looking chart. Another bell curve in the making? A theoretical drop of 90 percent – a devastatingly bearish outcome, to be sure – would see the stock return to 2012 levels around $200 per share. Ouch.

And that certainly isn’t an isolated example. Stocks from across sectors and ultimately indices like the Dow Jones Industrial Average and S&P 500 are showing symptoms of this same sickness.

The Risks Just Keep On a-Comin’

Charlie Bilello notes that, up until May 8, the S&P 500 had never had such one-sided trading in all of recorded history.

That may be a result of President Trump’s so-called plunge protection team that many have speculated only exists to provide another hit for the stock market’s next desperately-needed fix.

In a world of “free” money, the addict has no choice but to drive the price of paper assets parabolic. Add to that the fact that corporate buybacks are at record highs, and you have a technical and fundamental recipe for disaster.

Market commentators will point to the sale of unregulated initial coin offerings as the culprit for the downfall of crypto in 2018. The truth is that bitcoin, and to a lesser extent, altcoins have endured several boom-and-bust cycles.

A simple logarithmic chart from 2011 highlights this: This doesn’t mean you should race to liquidate your traditional portfolio or even worse, amplify your risks by shorting it.

Calling market tops and bottoms is a fool’s game, and only the luckiest traders are able to pull it off. That said, cryptocurrency is definitely looking a lot more attractive as an asset class right now.

In fact, billionaire pundit Mike Novogratz of Galaxy Digital believes the bull has returned and has a lot more room to run. So where are we in the crypto bubble cycle? It’s hard to say. This year marks the longest pullback in bitcoin history, but the bottom appears to be in.

When the air escapes from this stock market balloon, it may flow a lot quicker into this new asset class than you anticipate. Crypto has, after all, only captured a tiny fraction of the global economy.