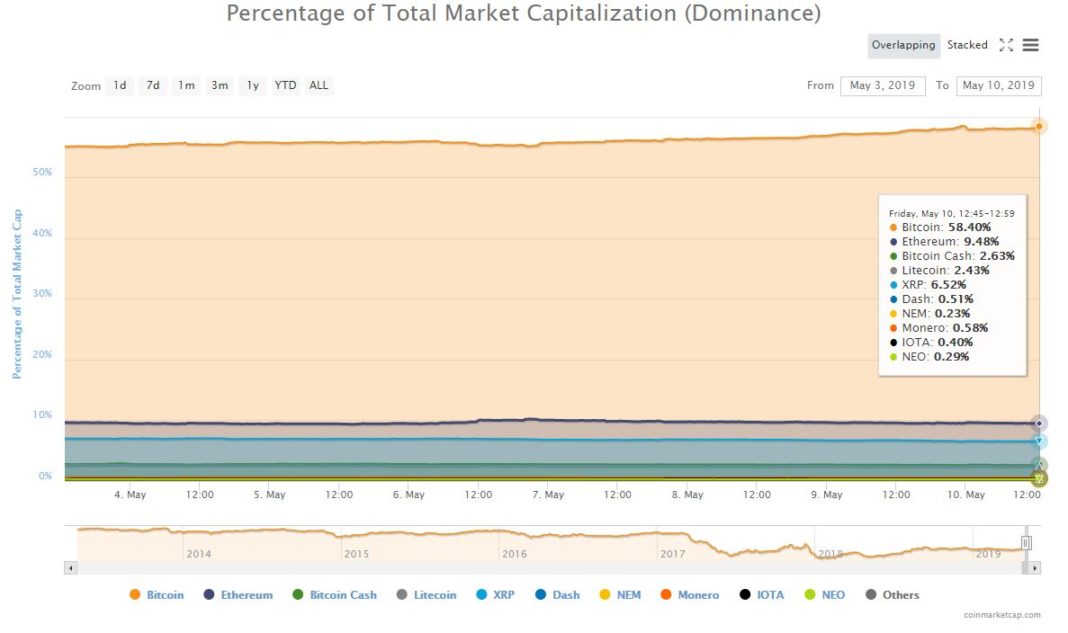 By CCN: As the bitcoin price bounded to a new 2019 high on Friday, a key market metric quietly surged to its highest level since December 2017 when the bitcoin price peaked at an all-time high just under $20,000.

Bitcoin currently boasts a $113.4 billion market cap, compared to a combined $80.8 billion split between the other 2,165 cryptocurrencies tracked by CoinMarketCap. It’s also more than six times larger than its next-closest competitor, Ethereum, which has an $18.4 billion valuation but remains lightyears away from achieving the long-awaited “flippening” that hardly anyone talks about anymore.

The last time Bitcoin Dominance was this high, CBOE had just launched the first regulated US cryptocurrency futures contracts, catapulting a parabolic BTC to an all-time high at $19,891. A year-and-a-half later, CBOE is preparing to bid farewell to crypto, though bitcoin futures continue to flourish on crosstown rival CME.

Bitcoin’s market share is even more dominant if you go by data from OnChainFX, which disregards the value of “illiquid” tokens, such as the massive XRP stockpile owned by the Ripple company. OnChainFX pegs BTC Dominance at 62.92%.

What Does Rising BTC Dominance Mean for Crypto Market?

So what does all this mean for bitcoin, aside from the fact that it is trouncing the horde of altcoins grappling for its throne? That much remains unclear.

Before the historic cryptocurrency bubble in 2017, Bitcoin Dominance regularly held above 80%. By January 2018, it had careened as low as 33%, thanks in part to the initial coin offering (ICO) boom, which has since gone bust. Though still a highly-risky asset itself, bitcoin is the cryptocurrency market’s conservative play. That’s one reason it weathered crypto winter better than its average altcoin competitor, and it also explains why altcoins tend to steal market share when low-information cryptocurrency investors dive headlong into bullish euphoria.

That’s precisely what occurred in January 2018, as Johnny-come-latelies who bought BTC in November 2017 found themselves sitting on a fortune just one month later, fancied themselves the second coming of Warren Buffett, and FOMO-bought ripple all the way up to $3.84.

So will crypto investors take their profits and use them to speculate on riskier altcoins, as they have done in the past? Conventional wisdom suggests that will happen at some point, though Google Trends data indicates that the hype-driven investors most susceptible to this trend still haven’t returned to the crypto marketplace.

The bitcoin price has surged around 70% in 2019, but Google search data indicates that hype-driven investors haven’t returned to the crypto marketplace. | Source: Google Trends

On the other hand, I’d love to believe that the cryptocurrency industry’s longest-ever bear market had caused investors to sober up to the reality that Dentacoin – which is still worth a ridiculous $12 million –  probably isn’t ever going to disrupt the global dental industry.

But I wouldn’t bet any bitcoin on it.