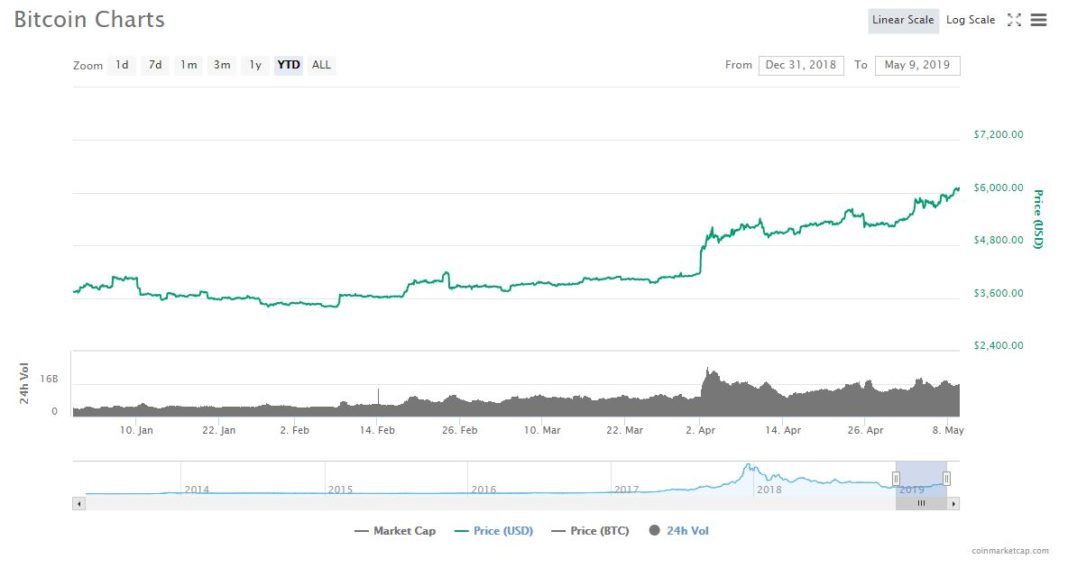 By CCN: Morgan Creek Capital Management founder Mark Yusko spoke to Bloxlive.tv about the Binance hack and his startling prediction that Bitcoin will eventually be worth $400,000.

Yusko made a compelling case, taking a positive out of the massive $40 million loss that Binance suffered, saying that hackers prove the value of Bitcoin.

“People don’t steal things that don’t have value. The fact that hackers are going to all this work to try to steal things like Bitcoin, I think, confirms the value thesis. I also think it points to a couple of other really good things for the ecosystem, like the need for insurance. The fact that Binance has a fund that they take a piece of their profits and set it aside to make customers whole in the event that this happens, kind of like the FDIC in banking.”

The Bitcoin price jumped to a 2019 high on Thursday. | Source: CoinMarketCap

He also said that the resilience of Bitcoin is notable in all this. The current miniature bull run has continued, with Bitcoin surpassing $6,000 per coin in the past couple of days. The market has “shrugged off” the breach, according to Yusko.

“It’s good to see that the ecosystem is resilient, that the system can deal with these types of things, and if you think back over time, the fact that banks get robbed all the time and people lose their wallets or have their purses stolen, doesn’t mean that we stop using money. […] It doesn’t mean that that good has less value.”

Yusko’s $400,000 price target hinges on the idea that Bitcoin is a store of value more than anything else. Compared with gold, Bitcoin has unarguably superior features. Its portability, guaranteed scarcity, fungibility, difficulty to counterfeit, and the ease with which it can be broken down into smaller units all factor in that statement.

Mark Yusko’s Bitcoin Bet is Bold – But Not Insane

Mark Yusko believes that eventually, Bitcoin will be on par with gold, which has a market capitalization of around $7.4 trillion. His $400,000 token price is simple math derived from a future scenario where the global Bitcoin market is equivalent to what gold is today.

“Gold […] has been hard money for 5,000 years. […] It’s about 7.4 trillion dollars in value. The best thing about Bitcoin is it’s digital gold. It’s much easier to transport; it’s much easier to divide. […] It has all these essential qualities that I think are superior to gold. If we get the amount of value equal to gold, that would be about 7.4 trillion, divide that by 21 million coins, you get around $400,000 per coin, maybe $500,000 per coin. When does that happen? It might be a decade or more.”

Obviously, some contingencies should be mentioned when reporting on this price target. For one thing, inflation will likely adjust the market for gold as time goes on. It could be more or less.

Mass adoption seems crucial to any significant long-term price prediction, and effectively this means that an increasing number of financial institutions and users will choose Bitcoin over alternatives.

All of which makes the prediction bold, but not insane.

It’s logical to expect that Bitcoin might reach the same market capitalization as gold, but it’s difficult to expect that to happen within a given time frame. If the Binance hack proves anything, it’s that the market as a whole is still quite new and major components of it are in various states of maturation. That being the case, it could be much longer than a decade.