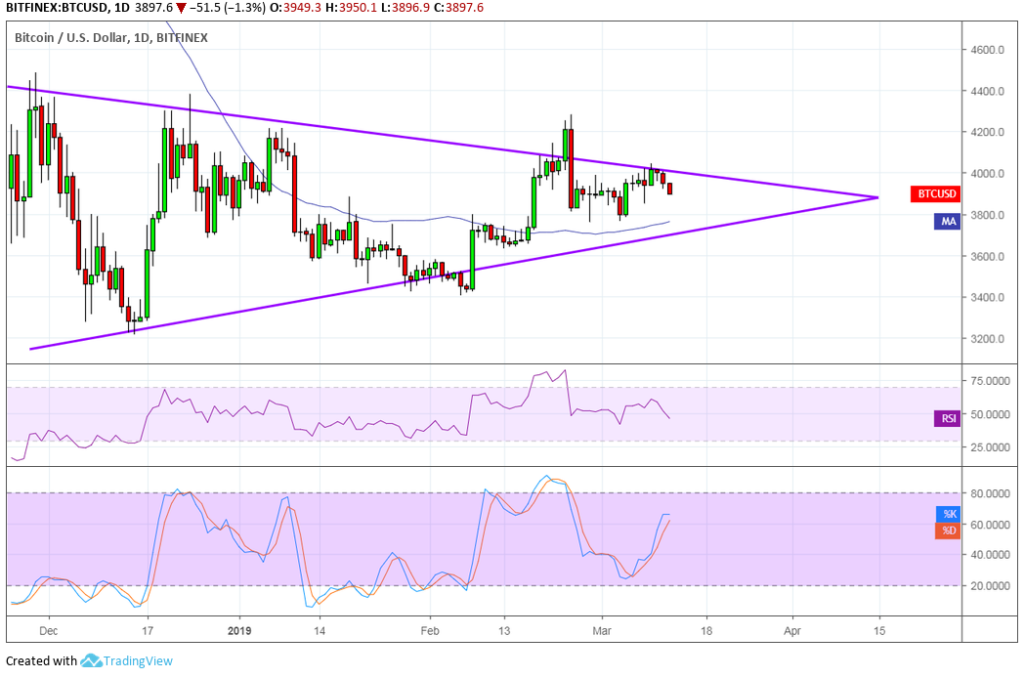 Bitcoin has formed lower highs and higher lows to trade inside a symmetrical triangle pattern on the daily time frame. Price has once again been rejected at the triangle resistance, so it might be setting its sights back on support.

The 100 SMA is below the longer-term 200 SMA on this daily time frame to indicate that the path of least resistance is to the downside. This confirms that resistance is more likely to hold than to break or that support is more likely to break than to hold. However, the 100 SMA lines up with the triangle bottom around the $3,800 level to add to its strength as support.

Still, a break below this area could spur a drop that lasts by the same height as the chart formation, which spans $3,200 to around $4,300. Similarly a  break above the resistance around the $4,000 major psychological mark could be followed by a climb of the same size.

RSI is pointing down to indicate that sellers have the upper hand, which might be enough momentum to drag bitcoin back to support. On the other hand, stochastic is pointing up to signal that buyers have some energy left to make another attempt at breaking above the triangle top.

Bitcoin analysts are starting to warn about further declines in the cryptocurrency price as the $4,000 barrier seems a tough one to crack. Some are predicting that it could go as low as $1,850 before having a chance of bottoming out and attracting stronger volumes.

However, it’s important to note that Fidelity might be working closer to launching its institutional platform anytime this month, which might draw big inflows from banks and funds. Further delays, however, could weigh on the already feeble optimism in the industry and spur a larger wave of profit-taking.