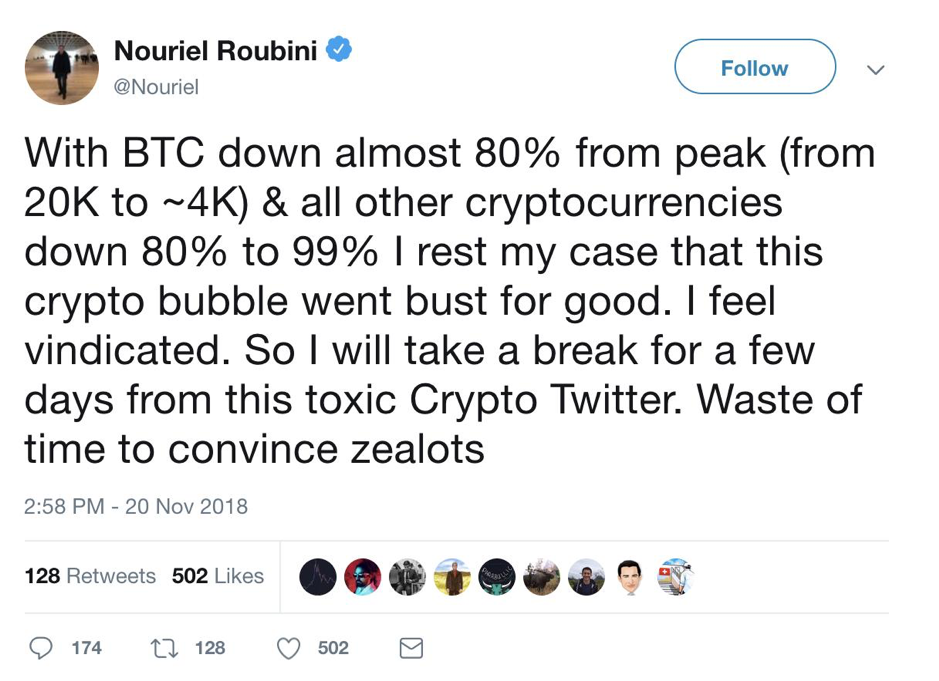 The bitcoin rally has accelerated to $7,355 on Coinbase representing a 14% gain in the past 24 hours, although has slipped back to $7,096 at the time of writing in volatile trading. Now some analysts are asking is this overreach?

As clouds gather over the global economy and the geopolitical picture darkens re. North Korea and Iran, bitcoin is looking more and more like a safe haven, despite the doubts of naysayers such as economist Nouriel Roubini, aka Dr Doom.

Maybe Roubini is regretting leaving the digital footprint of his wrongness behind for all to see, as in the tweet below from 20 November last year::

So is this the lift-off or a blow-off? That’s the question on the mind of much watched trader Peter Brandt, who tweeted the chart below with the accompanying comment “Blow-off or lift off”:

The fear that the advance is down to shorts being taken out in a squeeze can explain the speed and trajectory but may wane in effect the further north the price travels.

Nevertheless, a period of consolidation is approaching even if the overall direction of travel has been set.

Fundstrat’s Thomas Lee reminds us that historically the period of price advance is narrow. The performance of bitcoin can typically be accounted for in 10 days of the year. Commenting on Twitter he says:

“This week’s strong move on #crypto and especially #bitcoin
is reminder $BTC historically generates its annual performance in 10 days. Miss
those 10 days and average return is -25%.”

With New York Blockchain Week upon us and the undoubted excited attention of the mainstream press on Monday, there’s every reason to believe that this parabola may not be done for a few days yet… but consolidation is coming

But at what price can we expect FOMO to really start kicking in?

That feels about right for the the crowd “who gloated bout 90% crash” as Lee observes, but for others it looks like it may already be happening.

For those who were in but then got out in a hurry, it doesn’t’ take much to fire up the Coinbase app and buy a slug of BTC, ETH, BCH, LTC or ETC.

Take what you will from that price target but one thing is clear – they think a new bear market is here.

The firm cites improving fundamentals to justify its stance. Take transaction value – jumping from $478 million in February to $801 million at the start of May. It also highlights the SegWit progress, noting that 36% of transactions were now using it.

As bitcoin rockets, its dominance has risen to 58.7% but altcoins are now joining the party.

The biggest riser among the top alts is Bitcoin Cash (BCH) as it again shows its ability to attract buyers as a result of its connection to the bitcoin brand. The fork from bitcoin was trading 18% higher at $341.

Litecoin (LTC) returns to its winning form of late and is the next best performer as it closes in on the psychologically significant $100 mark, currently priced 20% the better at $93.

Seeing a similar uplift is Cardano (ADA), up 16%, according to coinmarketcap.

Number-two coin Ethereum had broken through $200 but is currently priced at $191 for a 9% rise.

All the top 20 cryptoassets are registering substantial gains.

In short, the entire crypto universe is rising, with bombed-out tokens lurking in the nether world seeing the largest moves.

Although many analyst are surprised by the strength of the bitcoin surge and the asset class rally it has triggered.

But the best performers among the 2,169 coins listed by
coinmarketcap, BuckHathCoin (BHIG) would have earned you a 696% return on the
past 24 hours.