Bitcoin has been on a tear in recent days and has surpassed $8,000 for the first time since July 2018. This has had made the entire crypto market surge by over $20 billion as fomo fever grips the scene once again.

A few hours ago during early trading in Asia, Bitcoin hit a ten month high of $8,045 according to Coinmarketcap.com. It is a second thousand dollar day for BTC which surged 14 percent from trading just above $7,000 the same time yesterday. At the time of writing BTC had pulled back below $8k to $7,920 which is still up significantly on yesterday. No such correction has come yet.

New 2019 highs have been made and broken several times over
the past week and the gain over the seven days has been an epic 33 percent.
Daily volume has surged back to $30 billion as Bitcoin steamrollers the rest of
the cryptocurrencies with dominance approaching 60 percent.

The last time Bitcoin commanded so much of the market was
during the massive surge in December 2017 when it pumped $10k in a single
month. The chart patterns at the moment are reminiscent of that late 2017 period
when things went parabolic in crypto land.

The difference this time around is that Bitcoin is getting
the lion’s share of those gains and the altcoins are getting left in the
digital dust. BTC FOMO is real and analysts are now eying $8,200 as a top and a
possible correction to $6,400, last
year’s most traded price. Gone are the days when they foretold of a big
dump below $3,000.

The big move has resulted in a $20 billion cash injection to
total crypto market cap which is currently at its highest level since early
September 2018. Market hit an eight month high of $235 billion a couple of
hours ago as volume surged to record levels of $90 billion.

Over the past week crypto market cap has surged 24 percent
and since the beginning of 2019 iy has made a whopping 87 percent. Only a
handful of the altcoins are matching Bitcoin’s double digit performance at the
moment and they include XRP, Binance Coin, Monero, IOTA and Tezos.

The FOMO is real and the bulls are back in town. 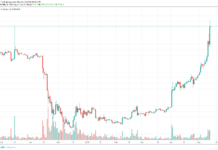 What Is Boosting Bitcoin (BTC)? –