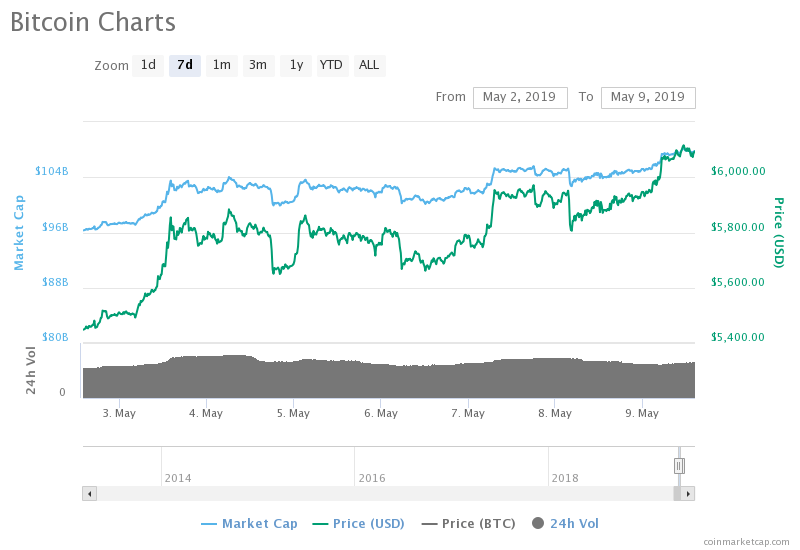 By CCN: The bitcoin price on Thursday broke above $6,000, a psychological level, to establish a fresh 2019 high.

The bitcoin-to-dollar exchange rate settled an intraday peak towards $6098.21, bringing its best year-to-date performance to 64-percent. The asset’s upside sentiment against the dollar, as well as other leading cryptocurrencies, further pushed its dominance upward to 57-percent, its highest since December 4, 2017. Meanwhile, it’s market capitalization jumped above $107 billion but was still down its historical high of $327.15 billion recorded on December 17, 2017.

BITCOIN PRICE IS HOLDING SUPPORT AT $6,000 FOR THE FIRST TIME SINCE NOVEMBER 15, 2018 | SOURCE: COINMARKETCAP.COM

The bitcoin price is overbought according to technical standards. It means the asset could soon undergo a bearish correction, bringing the rate down below $6,000. But bitcoin will retest $6,000 and extend its uptrend, at least according to three bullish indicators – a mix of both technicals and fundamentals – as discussed below.

The bitcoin price action as of late is mirroring its own moves recorded between August 2015 and December 2015. Back then, the price had formed a bull parabola, a curvy shape providing support to the then-ongoing uptrend. As bitcoin continued to trend north, its 50-period moving average meanwhile closed above its 200-period moving average. Eventually, the price posted close to 150-percent gains within four months. The new chart tells somewhat the same story. Bitcoin went through the textbook devaluation phase (the beginning) but rose later amidst global investment demand (the uptrend; still going on), and will eventually enter a popular speculative mania. In the middle of everything, meanwhile, is a bullish Golden Cross.

Considering the new parabola would mirror sentiments as showed in the old parabola, the bitcoin price is due to rise 57-percent higher than where it is now. That puts the asset’s bull target way beyond $7,000. As CCN covered earlier, the bitcoin price had a vast potential to test $6,800 as its primary upside target, according to a textbook trading indicator dubbed as Bump-and-Run Reversal (BARR). In retrospective, the asset had to break above the BARR resistance trendline to initiate a so-called Run phase as shown in the chart above. And it did. BITCOIN PRICE COULD BE TARGETTING $6,800 THANKS TO BARR | SOURCE: TRADINGVIEW.COM, COINBASE

BARR theorizes that the height of a breakout should be close to the height of the drop followed by the Lead-In Phase. That puts bitcoin’s bull target somewhere near $6,800, an ideal level because of its historical significance as resistance.

The bitcoin price is more likely to continue a bull run above $6,000 because of strong fundamentals. Fidelity, a Boston-based investment firm, will reportedly add bitcoin trading to its list of services “within a few weeks.” Coupled with Fidelity’s already-live bitcoin custodian services, the move would eventually allow institutional investors, such as family offices, pensions, and hedge funds, to purchase the cryptocurrency while ensuring bank-grade security.