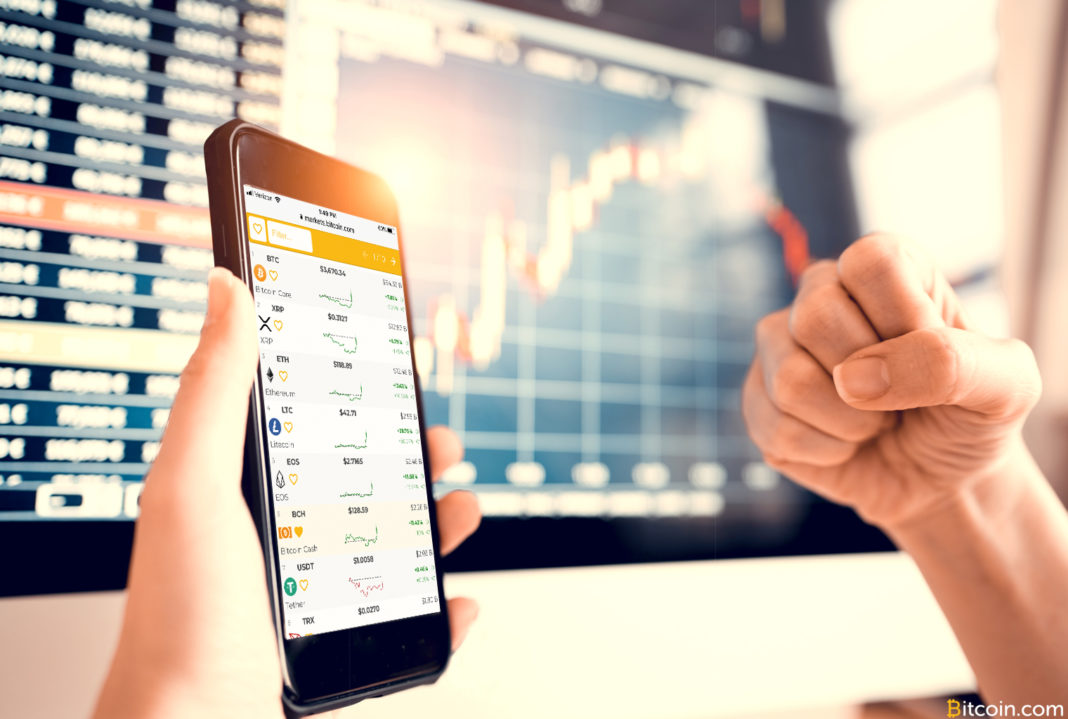 Cryptocurrency prices have spiked significantly in value during afternoon trading sessions on Feb. 8. The entire market cap of the top digital assets recorded today has added over $15 billion in fiat value in just one hour.

Also Read: Public Transportation Across Argentina Can Now Be Paid With BTC

Earlier today, news.Bitcoin.com reported on a slew of leading digital currency markets breaking the descending trendline since December 2017’s all-time high (ATH). Not too long after our markets update, the bearish price trend for most cryptocurrencies has started to show signs of reversing. At the moment the entire digital asset economy is worth roughly $120.5 billion and global trade volumes have spiked to $20 billion+ worth of 24-hour trades.

Bitcoin core (BTC) is currently trading for $3,657 per coin and has a market capitalization of $64 billion at the time of publication. 24-hour statistics show BTC has jumped 7.3% today in value so far, giving it a 4.8% lead in value for the last seven days. This is followed by ripple (XRP) markets, which are up 7.2% as each XRP is swapping for $0.31 a token. Ethereum (ETH) has jumped considerably seeing a 13.5% gain today with each ETH trading for $118 apiece. In a surprising move today, litecoin (LTC) jumped to the fourth largest market cap as the cryptocurrency has gained 28.4%. Each LTC is trading for $42 per coin at the time of writing. Lastly, eos (EOS) has seen a 16% increase over the last 24 hours and each coin is around $2.72.

Bitcoin cash (BCH) markets are up over 10% today and 9.7% over the last seven days. At the moment, one BCH is trading for $128. The overall market valuation for BCH is around $2.27 billion and the cryptocurrency has about $306 million in trade volume. The top five exchanges trading the most BCH today are Lbank, Hitbtc, Fcoin, Huobi, and Coinbase. USDT is the strongest pair today against BCH and currently captures 32% of today’s trade. This is followed by ETH (29%), BTC (21.5%), USD (7.5%), and KRW (4.3%). Bitcoin cash today holds the seventh highest trade volume below XRP and above TRX.

Looking at the BCH/USD 4-hour chart on Poloniex and Kraken shows bitcoin cash bulls have pushed the price past heavy resistance much like most of the top coins. At press time the two Simple Moving Averages (SMA) are still spread, with the 200 SMA above the 100 SMA. This indicates the path toward the least resistance is still the downside. However, the two trendlines seem as though they will crossing hairs in the near future which would further solidify today’s gains if things reversed.

RSI levels are screaming oversold conditions on the 4-hour BCH/USD chart but this is true for most coins at the moment. After the initial jump in price, there’s been a slight correction but nothing too crazy. Order books show a bunch more resistance for BCH all the way until the $145 range and from there, things look a touch lighter. On the backside, lots of foundational support has formed and if bears attempt to grab the reins again then they will see pit stops between now and $110 again.

Breaking the Descending Wedge and the Eventuality of a Bitcoin ETF

Many traders are curious about what will happen next after many of the top digital assets broke out of their descending wedges. Many coins tried to overcome resistance in the past and today’s daily spike shows a bullish engulfing candle on BCH, BTC, ETH, and many other charts. Traders and speculators are also talking about bitcoin exchange-traded funds (ETF) today. The commissioner at the U.S. Securities and Exchange Commission (SEC), Robert J. Jackson Jr., explained he believes an ETF will “eventually” happen. Jackson thinks that someone will satisfy the SEC’s regulatory standards. For now, today’s cryptocurrency trading session seem far brighter than the last two weeks and the faithful remain positive a change will come.

Where do you see the price of BCH, BTC, and other coins heading from here? Let us know in the comments below.

Disclaimer: Price articles and markets updates are intended for informational purposes only and should not to be considered as trading advice. Neither Bitcoin.com nor the author is responsible for any losses or gains, as the ultimate decision to conduct a trade is made by the reader. Always remember that only those in possession of the private keys are in control of the “money.”

Tags in this story

Jamie Redman is a financial tech journalist living in Florida. Redman has been an active member of the cryptocurrency community since 2011. He has a passion for Bitcoin, open source code, and decentralized applications. Redman has written thousands of articles for news.Bitcoin.com about the disruptive protocols emerging today.