Despite being criticized by many that the Silver coin LTC is depended completely by BTC‘s price movement, it is one of the few with high gains in the last 24-hours.

Out of the top ten leading cryptocurrencies, Monero‘s XMR is tremendously positive at 8.07% increase, followed by the 7th largest by market cap LTC at 6.37%.

As explained in our post: Did Bitcoin BTC reach a Bottom – on Sep 13th, since BTC declined to $6,200 the bulls have returned and speedy gave hope to the community. With Ethereum’s ETH tackling back above $200.00 things are looking way better than the previous week.

Billionaire investor and ex-hedge fund manager, Michael Novogratz, believes that the crypto market has bottomed out with the recent lows witnessed only yesterday. In a tweet he stated the following:

This is the BGCI chart…I think we put in a low yesterday. retouched the highs of late last year and the point of acceleration that led to the massive rally/bubble… markets like to retrace to the breakout..we retraced the whole of the bubble. #callingabottom pic.twitter.com/EasTBYgjSj

When it comes to the pair LTC/USD it is changing hands increasingly above the daily supportive trend line that could signal a well created ground for more gains with corrections respectively. 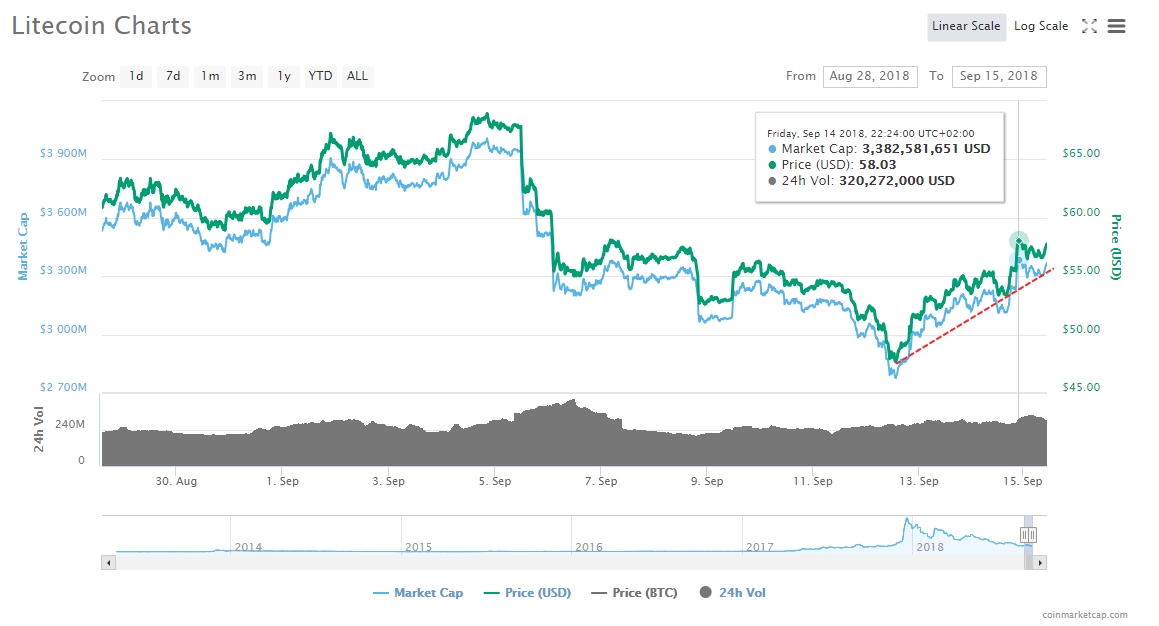 Bittrex – The cryptocurrency exchange Bittrex is keeping its promise of adding more USD pairs to the platform. In August the exchange announced that it will be launching fiat pairs for Cardano (ADA) and ZCash (ZEC) on the 5th of September. Prior to that – and on the 20th of August – the exchange had excited the XRP community by officially addingXRP/USD and ETC/USD pairs.

Following up, it is the turn for TRX and LTC with USD pairs to shine as from the 17th of September they will be available on the exchange. It has been made public via their twitter handle.

Charlie Lee – The very much respected and crypto-ecosystem key figure Litecoin (LTC) creator Charlie Lee during an interview for CNBC added the short-term price movements which could be massive corrections do not tell the state of the whole crypto-verse and its achievements. The long term state of the values truly mirrors what the ecosystem has reached and where it stands.

“In the long-term, [price] tells us the success of cryptocurrencies, but short-term it doesn’t really tell us much. For example this year, there’s been so much adoption in Bitcoin and Litecoin, but their price has dropped 60-70 percent. It’s because it’s so volatile, it’s all about speculation these days, but in the future the price will reflect the success of the currencies.”

According to Mr. Lee when the bears take over it is the best time to sit down and get things done that improve each individual network:

“I’d like to see more [talk around] Lightning Network and sidechains, ways of helping Bitcoin and Litecoin to scale. I think with the price depressed, it’s actually a good time for people to […] get stuff done. That’s what I’ve seen in the past few bear markets actually.”