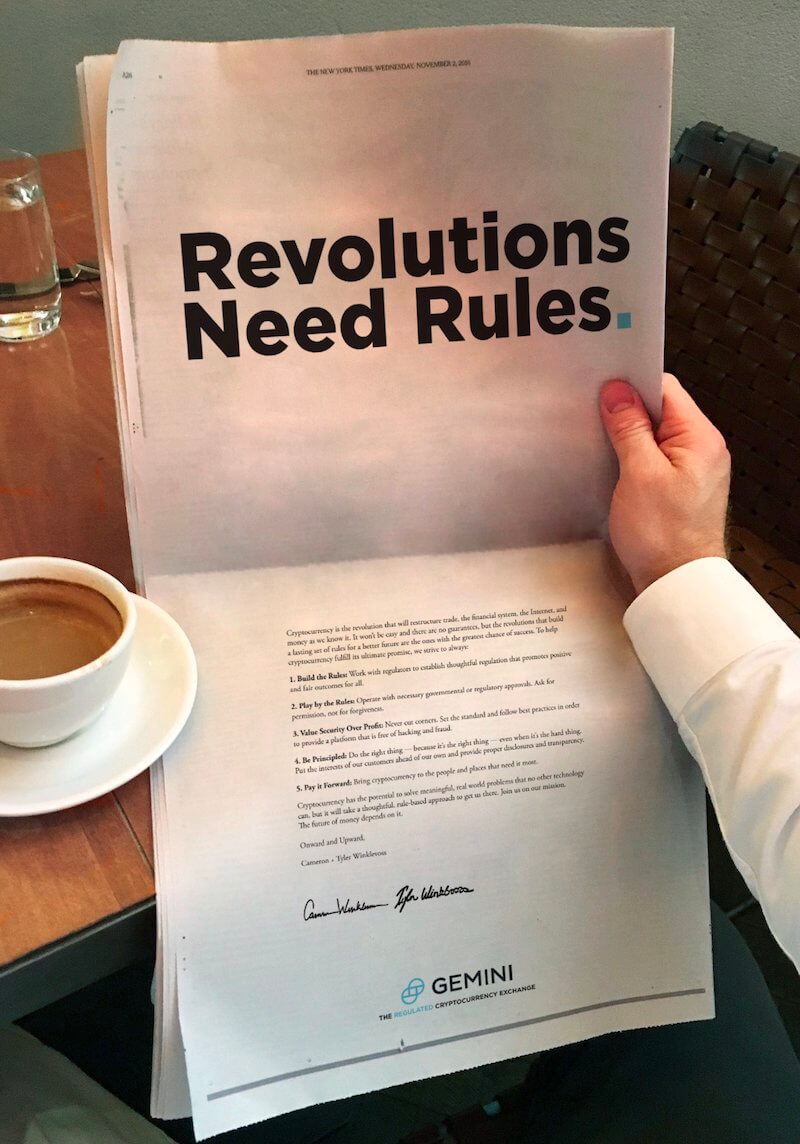 Bitcoin evangelists and Gemini founders Tyler and Cameron Winklevoss believe cryptocurrency has a “bright future,” given banking-style regulations are applied to the burgeoning sector.

In an interview with Fortune on Jan. 13, the Winklevoss twins noted the current market conditions of the cryptocurrency space are impeding growth for the industry’s development. The twins are notable for their work in shaping the sector, primarily from their efforts in founding Gemini Exchange, a regulated cryptocurrency brokerage, in 2014 and launching related services under the Gemini banner, such as custodial offerings and a stablecoin product.

Earlier last week, and on the tenth anniversary of Bitcoin, the twins took out a full-page advertisement in The New York Times promoting the Gemini Exchange and its newly-launched mobile app, close on the heels of rival exchange BitMEX They have also launched a campaign aimed at educating and spreading awareness of bitcoin to the masses and, hopefully, gain some users for Gemini.

Titled “Revolutions Need Rules,” the advertisement follows Gemini’s seemingly long-held business ethos of keeping the authorities pleased and not operating in a legal grey area. Since Gemini’s inception in 2014, the Winklevoss twins have sought all the necessary licenses and permits for operation while offering a limited range of cryptocurrencies to trade.

Tyler stated in the interview:

“The idea is that companies that build on top of things like Bitcoin should have regulation that’s thoughtful and that doesn’t stifle innovation.”

Cameron added bitcoin’s long-term growth is affected by a misconception of the asset’s anonymity features. Contrary to popular convention, Bitcoin addresses are similar to transaction IDs and wallet addresses are available for public viewing on its underlying blockchain. Coins such as Monero and ZCash, however, mask their addresses. Furthermore, he notes negative media coverage adds to unfavorable public sentiment and promotes cryptocurrency as a financial tool for criminals.

Despite the bear market, the Twins hold on to their longtime prediction of bitcoin usurping gold in the future, mostly due to the divisibility and fungibility of the digital asset class over the world’s most preferred store-of-value. Cameron believes “the only thing gold has over bitcoin is a 3000-year head start.”

Meanwhile, the twins had no luck launching a Bitcoin ETF last year, despite offering several traditional market features to Gemini customers, such as insurance of all digital assets and custody services. The duo also heads the Virtual Commodity Association, a self-regulatory body based in New York that aims to replicate FINRA’s work in the crypto markets.

The brothers are no longer pursuing another ETF application, confirmed Cameron, but believe that stablecoins show great promise in the broader crypto markets in terms of development and usage.

Get blockchain news and crypto insights.