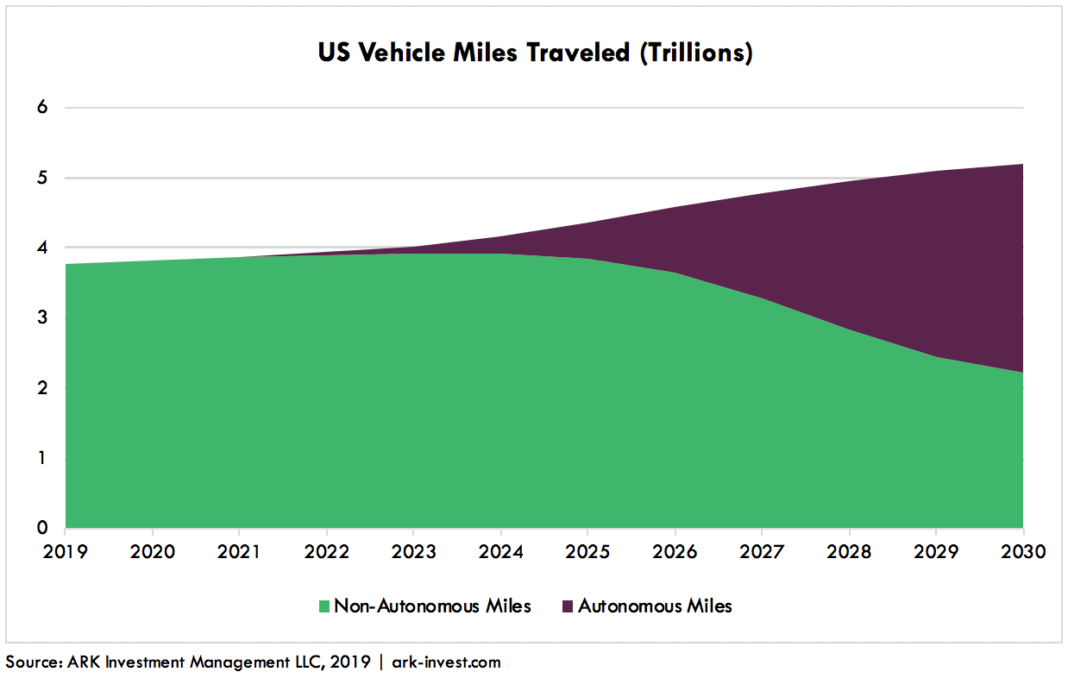 By CCN: A new report out of ARK Invest is wildly bullish on self-driving technology powered by the likes of Tesla and Uber.  But the autonomous revolution will come at a huge cost for Warren Buffett’s biggest business: insurance.

The firm, which manages $3 billion assets, says the car insurance industry faces its “biggest threat in history” as Elon Musk and others ramp up self-driving networks.

In the next 5-10 years, as riders may increasingly choose to travel on autonomous taxi networks, the auto insurance industry (a $220 billion market) will face the biggest threat in its history, a collapse in the number of drivers & accidents. – @GrousARK https://t.co/6VTM5YnVUs

Elon Musk and Tesla could crash the auto insurance business

ARK predicts that more than half of all miles driven in the US will be autonomous within the next decade. If that prediction is correct, it spells disaster for insurers. For two reasons:

Ark research points out that 94 percent of all car accidents are caused by human error. The volume of these incidents would drastically decrease in a future powered by Elon Musk’s self-driving robotaxi fleet. Even in its early stages, Tesla’s Autopilot technology is seven-times less likely to get into an accident than a human.

“The cost to insure autonomous vehicles will be significantly cheaper thanks to their superior safety profile.”

The number of autonomous miles on US roads will increase to 57% in the coming decade. Source: ARK Invest

ARK predicts that self-driving networks will wipe off as much as half the auto insurance market by 2030. Current forecasts put the market at $300 billion in 2030, but ARK says it’ll be closer to $150 billion. Auto insurers are forecasting a $300 billion market in 2030. When you include autonomous data, it’s closer to $150 billion. Source: ARK Invest

Warren Buffett is dangerously exposed to this looming collapse in the insurance industry. A third of his empire is built on insurance with stakes in National Indemnity and GEICO, the second-largest US auto-insurer.

ARK estimates the biggest hit will come from 18-24 year-olds. Not only are they the most likely to embrace autonomous taxi fleets, they currently pay the biggest insurance premiums.

“Today, younger drivers pay much higher than average premiums because they account for a disproportionate number of accidents. Consequently, as autonomous vehicles go mainstream, insurers will lose their highest paying customers first.”

Warren Buffett shrugs off the threat

ARK goes on to predict that car companies would issue their own insurance.

“Traditional insurers will try to offer products for autonomous vehicles, but as risks shift from drivers to cars, original equipment manufacturers (OEMs) probably will insure the vehicles themselves.”

It’s a move confirmed by Elon Musk who recently revealed plans for a Tesla insurance plan. Buffett wasn’t convinced, saying he’d bet against any car company issuing its own insurance.

It’s worth pointing out that ARK Invest is heavily exposed to Tesla. TSLA stock is the largest holding in ARK’s flagship exchange-traded fund (ETF) with 10.35 percent exposure.

Why CIO of Major Investment Firm Says Tesla’s Stock is Going to $4,000 https://t.co/JpjJHxe2jT

“Our conviction in Tesla is so high it never left our top position… We learned about Tesla’s artificial intelligence chip. We saw the specs. Our analyst, James Wang, cames from Nvidia, and he said ‘oh my goodness.’ This leapfrogs the competition. They are at least three or four years ahead of the competition.”

TSLA stock is set to open almost 2 percent down in Monday’s trading session.