Bitcoin (BTC) is just a fraction of a percent down on the day to trade at $6,484 to press time. Having reclaimed the $6,500 price point September 13, the top coin failed to break through to a yet higher level, but has instead jaggedly circled to consolidate the $6,500 mark.

Despite a brief dip earlier today below $6,460, Bitcoin has since somewhat rebounded in the hours before press time.

On the week, Bitcoin is up almost 4 percent, with monthly gains at a modest 2.66 percent. 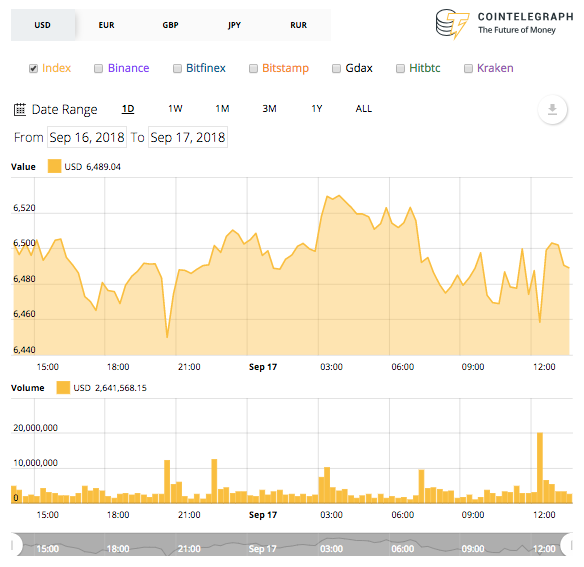 Ethereum (ETH) is today trading around $219 to press time, down just half of a percent on the day. The top alt has been on a tear as of the evening of September 12, seeing double-digit growth to rebound from its intraweek dip to below $170 back to a comfortable $50 higher.

Over the past couple of days, Ethereum has cleaved close to the $220 mark, only losing ground briefly yesterday, September 16.

Ethereum is up a bullish 11.8 percent on its weekly chart, and has significantly closed down its losses on the month, which are now at 23.5 percent. 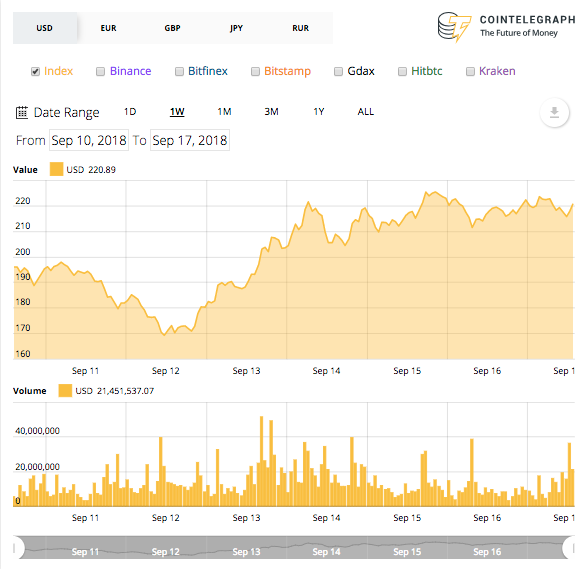 Among the other top ten coins on CoinMarketCap, most are seeing modest gains capped at 2 percent maximum. Stellar (XLM), ranked 6th, is the strongest performer over the 24-hour-period, up 1.9 percent to trade at $0.208 to press time.

Among the top twenty coins by market cap, most gains and losses are mostly within a 2 percent range either way, with the exception of Dash (DASH), ranked 11th, which has sealed a solid 4.3 growth on the day and is trading at $196.81 to press time.

Total market capitalization has been fluctuating on the day. After briefly spiking as high as $204.4 billion earlier today, it has since declined to $202.6 billion as of press time.

The week has has seen a jagged but nonetheless consistent recovery since total market cap dipped as low as around $186.3 billion September 12.

A Cointelegraph analysis piece this weekend gave insights into the oft-repeated analogy drawn between the crypto bear markets and the dotcom bubble. As Bloomberg reported earlier this week, VanEck’s MVIS CryptoCompare Digital Assets 10 Index – which tracks the prices of top ten digital assets – was down 80 percent as compared with its January high. The data thus represents a heftier plummet than the Nasdaq Composite Index’s 78 percent nosedive at the height of the dot-com crash.

Nevertheless, as CT’s analyst argued, key structural differences – including a significantly smaller total market cap size for crypto and the fact that retail investors have a significant footprint in the crypto industry, unlike the venture capitalists of the dotcom days – means that such comparisons are not necessarily as clear-cut as the figures may at first glance suggest.