Tuesday, September 25: amid a market-wide tumble, Ripple (XRP) and Ethereum (ETH) are seeing another day of steep losses. Both coins are shedding percentage value in the double-digits, as data from Coin360 shows.

While Ethereum has now reclaimed its established ranking as second-largest coin by market cap on CoinMarketCap – which it briefly ceded to a soaring Ripple on September 21. The altcoin has today seen a 10.4 percent loss to trade at $209 to press time.

After soaring as high as $250 on September 22, Ethereum briefly held between $240–$245, before a plummet set in yesterday, accelerating yet further downwards today.

On the week, Ethereum’s gains remain up by 6.9 percent; monthly losses are at around 25.2 percent. 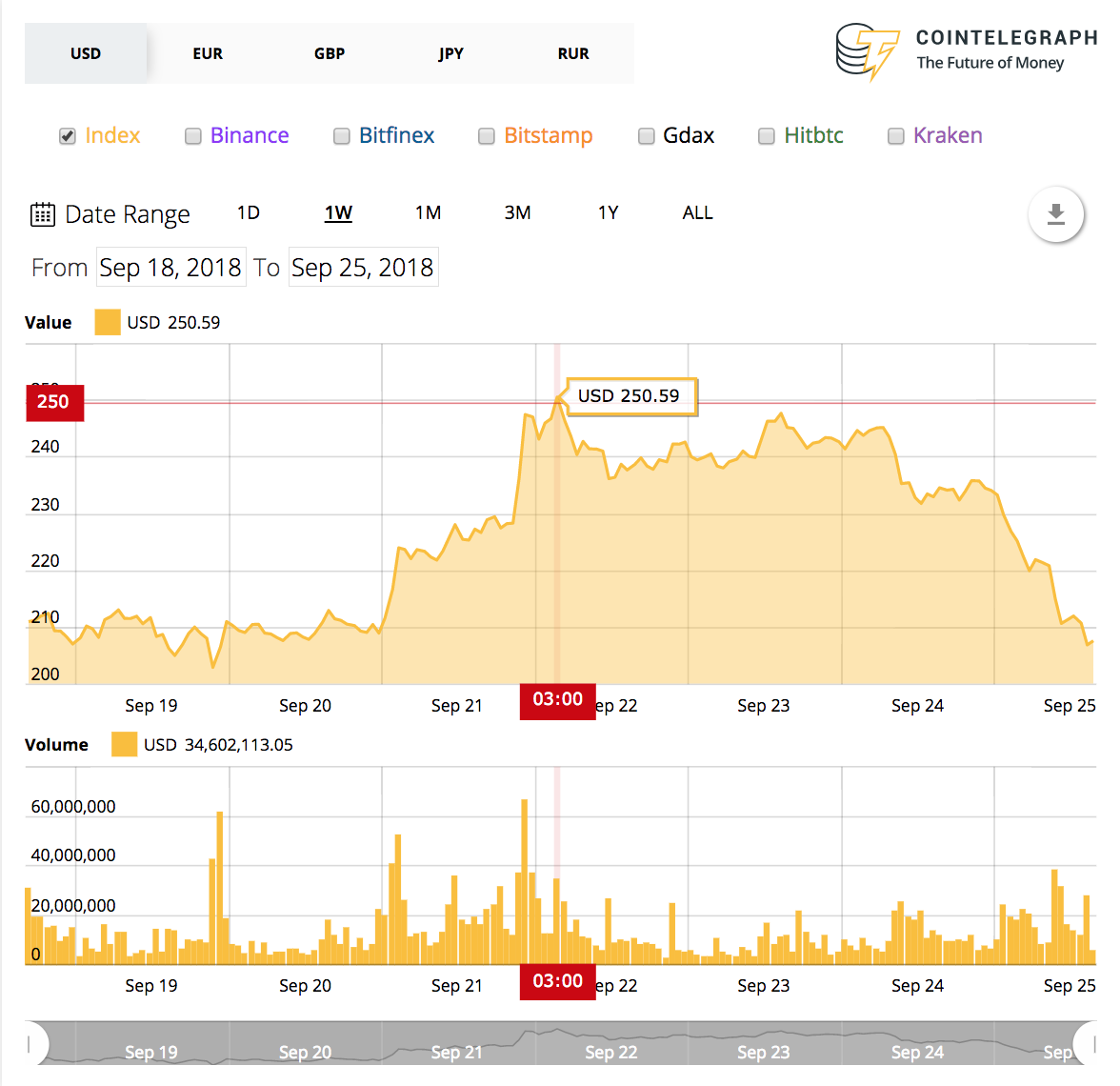 Ripple (XRP) has had an unprecedented week, following its brief eclipse of Ethereum on September 21 to score a new ranking on CoinMarketCap as second-largest cryptocurrency in the entire market. The asset’s market cap had hit around $23 billion.

Nonetheless, the ensuing days have seen Ripple’s position decline somewhat. The asset is today down around 13.8 percent over the 24 hour period, and is trading around $0.45 at press time.

Last week notably also saw suggestions that Ripple is likely to launch a commercial application of its xRapid liquidity solution for banks “in the next month or so.”

On the week, Ripple is still up 68 percent, with its monthly gains at around 39 percent. 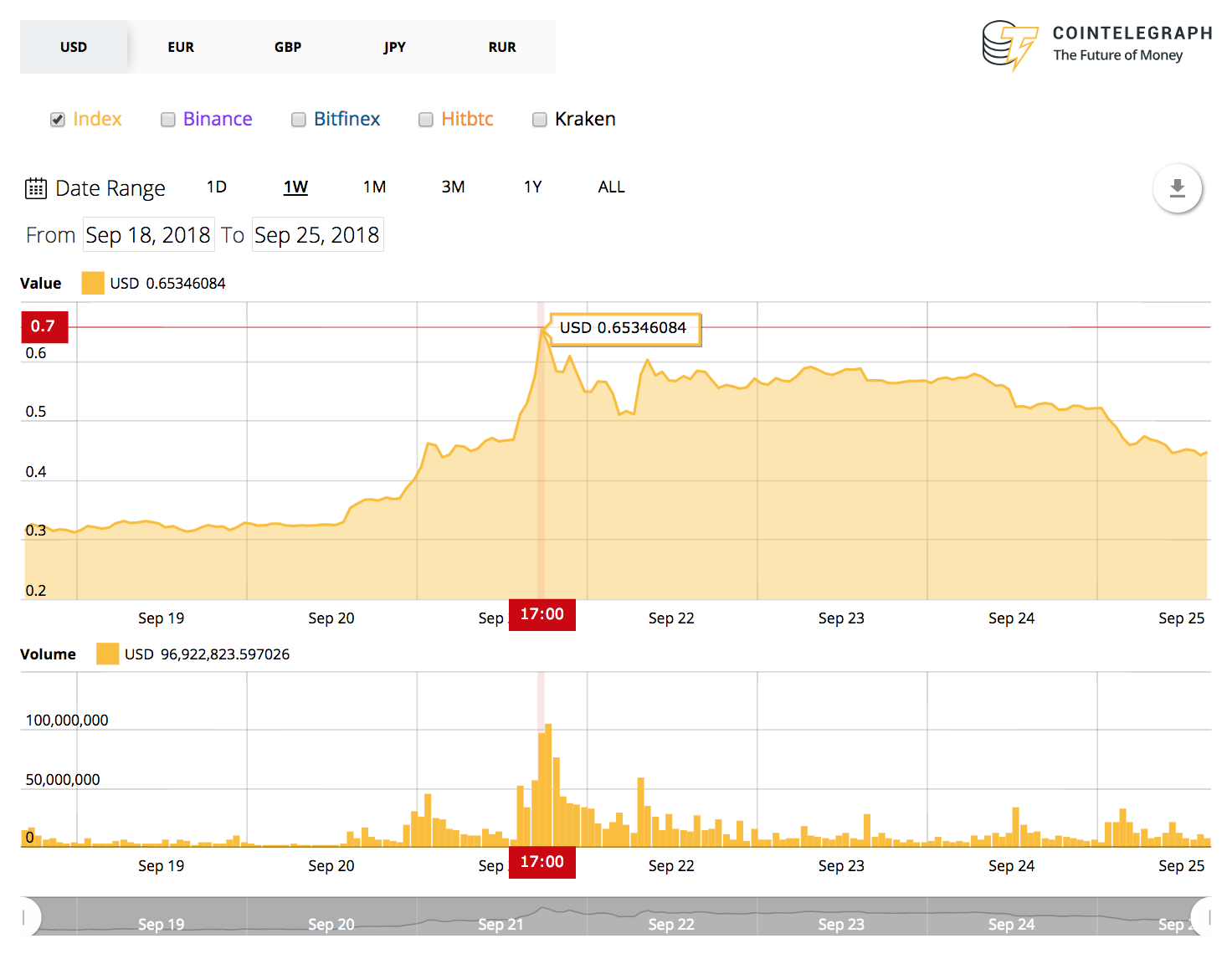 Bitcoin (BTC) has had a markedly more stable week, seeing less sudden growth as well as less severe losses, although it has nonetheless consistently shed value over the past couple of days. The top crypto is down around 2.6 percent to trade around $6,426 as of press time.

Bitcoin’s depressed performance has not yet impacted its weekly chart, which is almost 3 percent in the green. On the month, however, Bitcoin is down slightly over 4 percent. 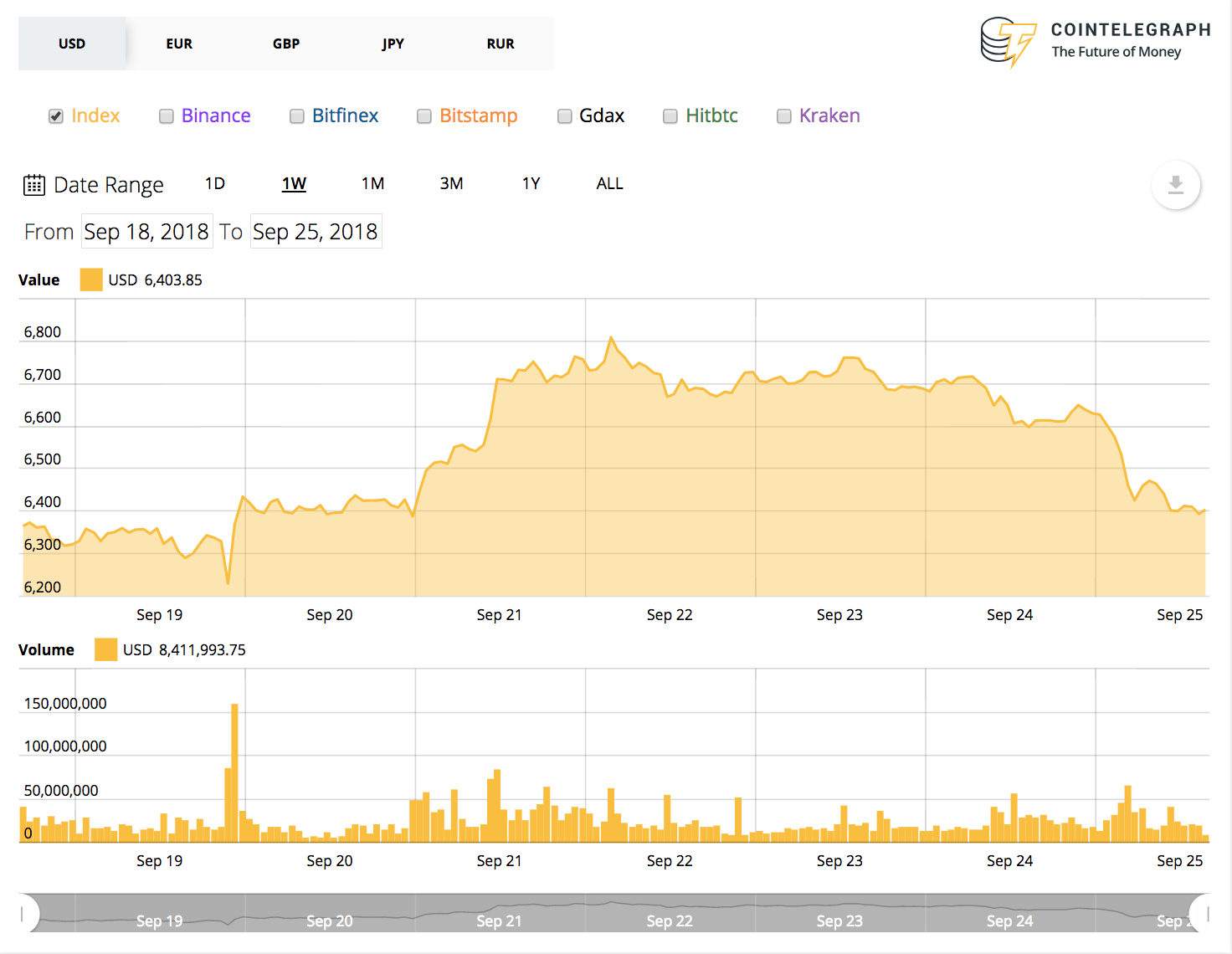 Among the top ten coins listed on CoinMarketCap, Stellar (XLM) has again been hit with the most severe losses on the day, barring ETH and XRP, down 9.35 percent to trade at $0.24 at press time. 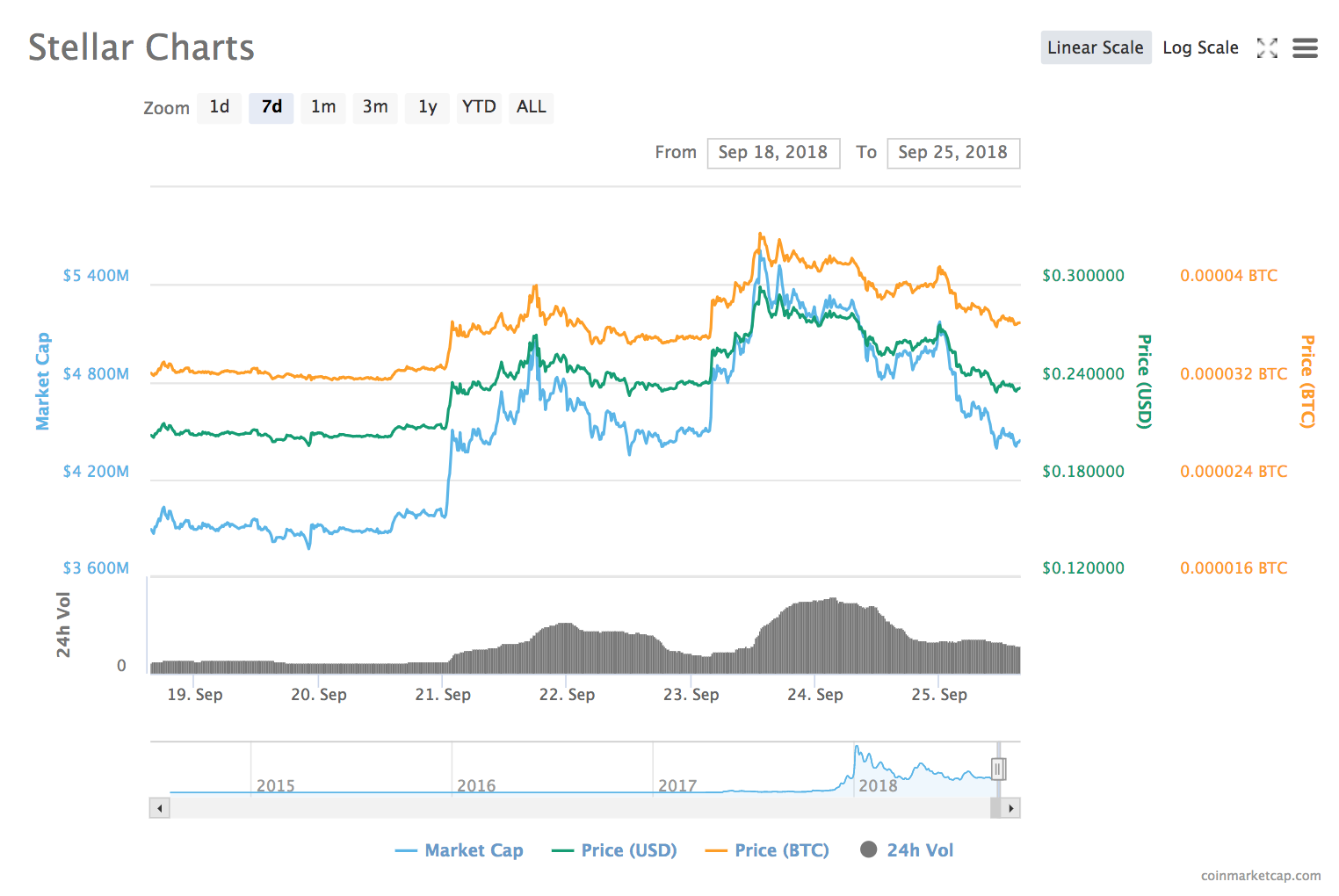 Total market capitalization is around $207.6 billion as of press time, down around $25 billion from its intraweek high of close to $229 billion. 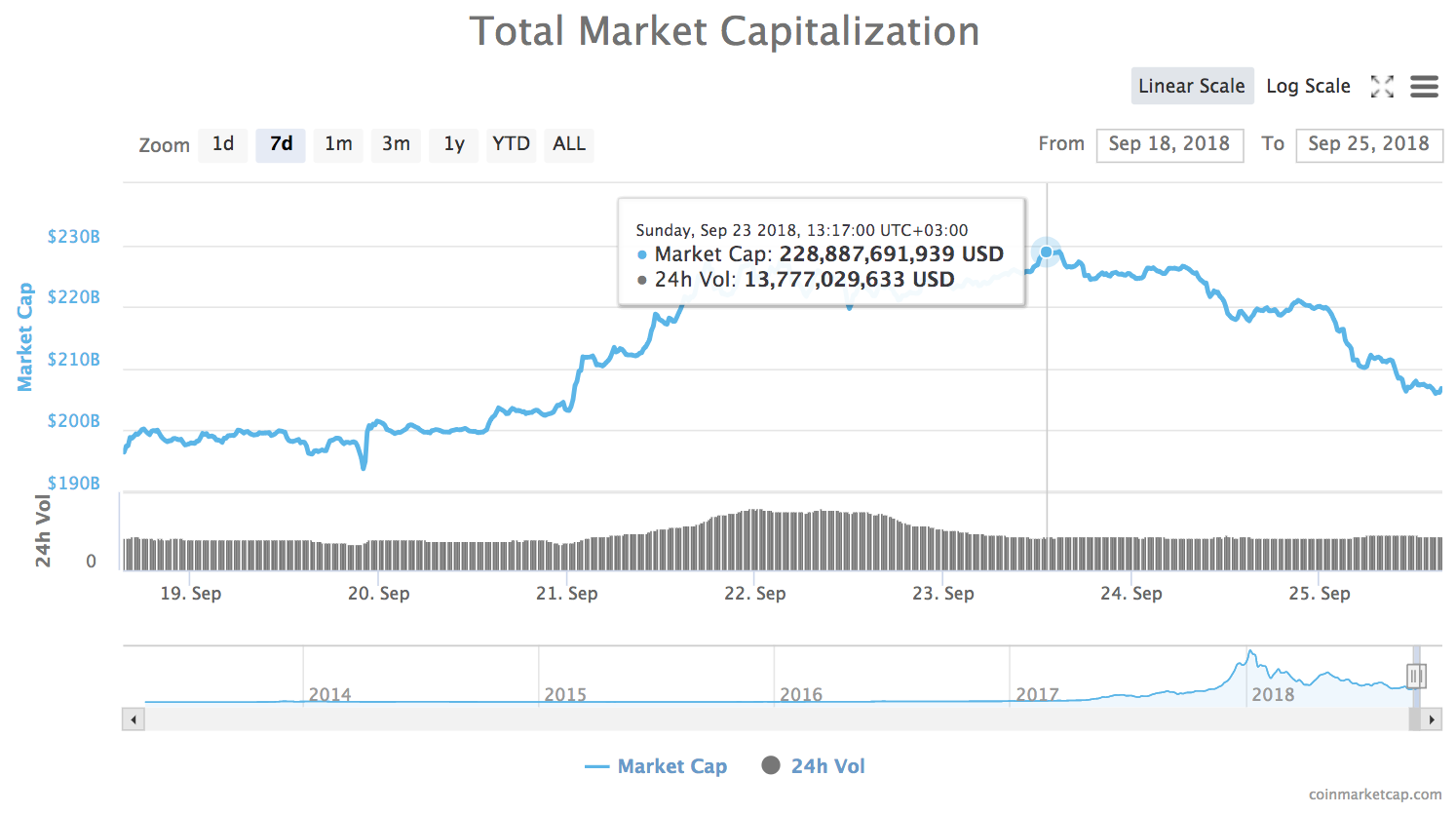 A new report published this week by the Bank for International Settlements (BIS) – an organization based in Switzerland and made up of 60 of the world’s central banks – identified a strong correlation between crypto prices and news of regulators’ interventions.

BIS’ empirical research found that the markets responded most noticeably to news events regarding the legal status of crypto – with strong adverse reactions to news that pertains to bans, the possible applicability of securities market law to crypto assets, or to announcements that crypto will not be recognized as a currency.

The report also notably underscored that crypto markets remain segmented between different national jurisdictions, given the discontinuity of regulators’ approaches in different countries.

Major regulatory action is under scrutiny today in India, with the country’s Supreme Court set to listen to the final round of petitions against Reserve Bank of India’s (RBI) ban on cryptocurrency dealings. The contentious ban has officially been in force since July 6, and the Court was initially set to rule on its legality on July 20.