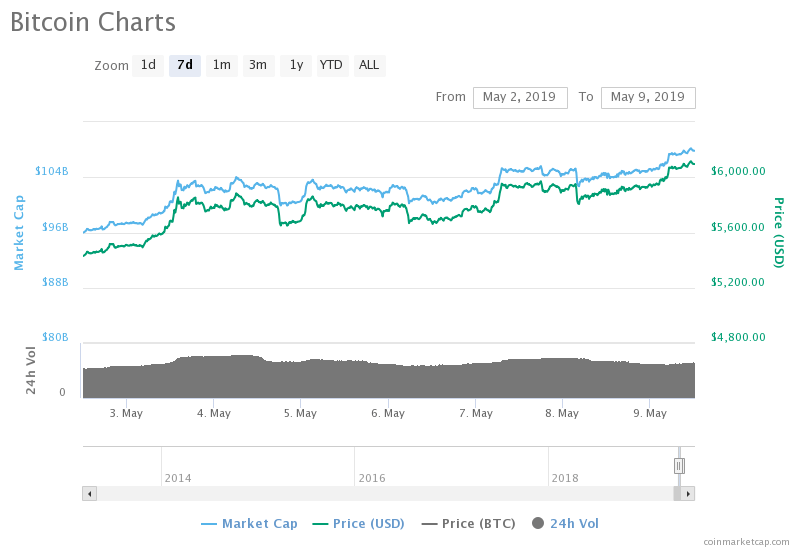 By CCN.com: After hitting a new 2017-high, bitcoin price could struggle around $6,000 before moving higher, according to Mike Novogratz.

The billionaire chief executive officer of Galaxy Investment Partners LLC said bitcoin was the only store of value while the rest of the cryptocurrencies still had to prove their particular use-cases. That gave bitcoin a certain edge over the market which, upon testing a technical barrier at $6,000, could explode towards higher upside targets.

“Bitcoin is worth $100 billion,” Novogratz told Bloomberg. “It’s the social construct that made it worth $100 billion. It’s pretty fu**ing cool – like a self-fulfilling prophecy. I feel better about bitcoin today that I have [at] any time of my career.”

Novogratz’s statement came just hours before the bitcoin price broke above the $6,000-level. As of 0841 UTC, the crypto-asset was trading at $6,062, after correcting lower from its newly-established 2019 high towards $6098.21. The bulls considered $6,000 a critical level for bitcoin, given its history of capping the asset’s infamous downtrend in 2018 on almost ten separate occasions.

There was still a possibility of the bitcoin price pulling back below $6,000 to neutralize its overbought conditions. Novogratz agreed but maintained his long-term bullish stance for the cryptocurrency. Among the reasons for his confidence was an increase in regulations and inspections in the wake of growing crypto frauds, as well as institutional adoption by the likes of Fidelity Investments and social media giant Facebook, which was reportedly developing its own stablecoin.

Novogratz pointed out that a whole new generation, particularly the young technology talents, was interested in purchasing bitcoin.

“I went to five different venture capitalists/hedge funds. Each of them had some buoyant genius between 19 and 23 that had worked at the NSA, graduated high school when they were 12, and I thought to myself, ‘[Bitcoin] space was pulling the smartest kids of their generation.’”

Legendary investor Warren Buffett, who will turn 89 this August, recently issued fresh insults for bitcoin, calling it a “gambling device,” which hadn’t produced anything but “frauds.”

“It doesn’t do anything. It just sits there. It’s like a seashell or something, and that is not an investment to me,” the billionaire investor said.

The bitcoin community has since argued that Buffett doesn’t get the technology that backs the cryptocurrency.

“So this time Mr. Warren Buffett compares Bitcoin to seashells,” said Nischal Shetty, the CEO, and co-founder of WazirX crypto exchange. “I have great respect for him but looking at his history with tech (Google, Amazon), it’s safe to assume tech’s not his strongest point.