It appears Bitcoin’s troubles are far from the over. The number one cryptocurrency has been enduring a difficult few days. BTC has so far declined by almost 18 percent in the last seven days.

BTC slipped further on June 13, falling below the $6,500 mark. This latest pullback follows the significant drop over the weekend that saw it lose 10 percent in a matter of hours on June 10. Bitcoin is currently at its lowest price level since April is trading at $6,450 according to CoinMarketCap. The number cryptocurrency has experienced four sharp price drops within mere hours since June 10. This bear run has seen BTC dip by more than 50 percent since the start of 2018.

Reasons for the Decline

In the immediate aftermath of the initial price drop on June 10, mainstream media sources claimed the dip was due to the Coinraill hack. The coincidental timing between the price decline and the announcement of the hack on the South Korea-based exchange platform likely led to those conclusions. However, such notions have since been debunked. To begin with, BTC wasn’t stolen in the Coinrail hack. Secondly, the platform doesn’t rank among one of the top exchanges in the market. Thus, it is unlikely that the $42 million hack had much to do with the recent price drop.

According to Mati Greenspan on eToro, the reduction in prices currently seen in the market is most likely due to a market correction, saying:

The narrative that such a small hack caused such a large price reaction has definitely been overplayed.

Some commentators also identified price manipulation as the probable cause of the BTC price decline. Recently, the U.S. Department of Justice (DOJ) opened investigations into alleged shady trading practices in the Bitcoin market. The DOJ in collaboration with the Commodity Futures Trading Commission (CFTC) is investigating allegations of spoofing and wash trading in the cryptocurrency market. The U.S. government recently demanded that four major crypto exchange platforms hand over information on their operations.

Bitcoin isn’t the only cryptocurrency facing significant price troubles at the moment. Ethereum, the second-ranked cryptocurrency has gone below the $500 mark and is now trading at $475. EOS continues its spectacular fall – failure to reach voting consensus is delaying mainnet launch, and the price is in free-fall. EOS has maintained double-digit percentage losses over the past four days. It has declined 40 percent in the last one week. 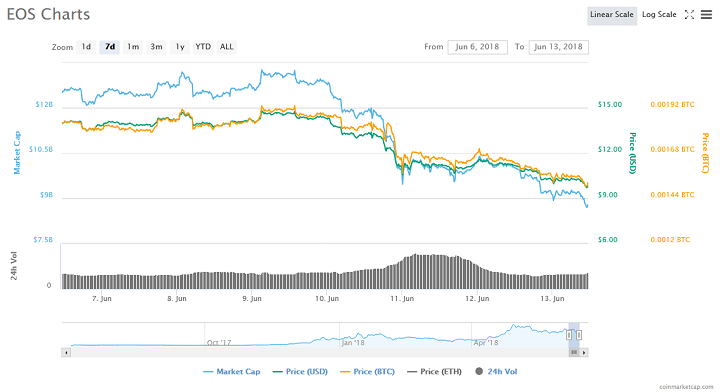 Litecoin and Dash are two other cryptocurrencies that are having a rough time of it. Litecoin, the sixth-ranked coin is currently trading below $100, its lowest price level since mid-December 2017. As for Dash, it has been in free-fall since the start of the year, losing 300 percent in the process – reaching a one-year low.

How low will BTC prices fall due to the present bear run? Is this the end for Bitcoin or is there any rebound on the horizon? Keep the conversation going in the comment section below.