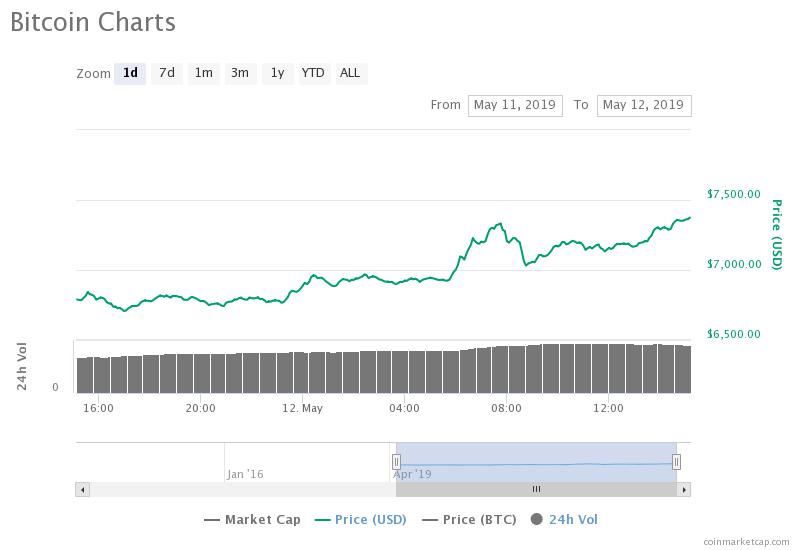 By CCN: The crypto market has made a spectacular return as it added $28 billion in the past 48 hours. The bitcoin price surged past $7,400 and hit a new 2019 high, marking the start of a new bull market.

Why is Bitcoin Rising so Rapidly?

Alex Krüger, a global markets analyst, said that the recent rally of BTC was initiated without the involvement of the mainstream.

This $BTC rally is happening without the general public yet involved en masse. This is very bullish. pic.twitter.com/H0wMEn56ND

In April, Three Arrows Capital CEO Su Zhu estimated the amount of fiat that exists within the crypto market ready to be allocated to crypto assets is hovering at around $6 billion.

“Theres an estimated $2B in cash sitting at crypto funds/holdcos. Theres another $2B+ sitting in stablecoins, and another $2B sitting at exchanges/silvergate/signature. This is $6B fiat already onboarded to crypto to buy your bags. Imagine thinking we need new money to hit $10k,” Zhu said.

Investors within the crypto market are likely to have triggered the recent run of bitcoin, which was further fueled by the liquidation of shorts on major crypto exchanges that led to a proper short squeeze.

Does the Market Have Fuel Left?

Following a staggering $28 billion recovery and a 30 percent rally by bitcoin in a span of a week, some traders have expressed concerns over the lack of clear stimuli that could sustain the current bull run of crypto assets throughout the near-term. The crypto market added $28 billion in the past 2 days as the bitcoin price surpassed $7,500

One cryptocurrency trader suggested that the CME bitcoin futures market, which closed at $6,290 on Friday, could further intensify the momentum of the market as it opens on Monday.

CME BTC bitcoin futures closed at 6290 on Friday. Tomorrow (Sunday) at 18:00est is the market open, mark your calendar, it will be lit.

For context, although the bitcoin futures market has been largely dismissed in the past year due to the presence of fake volumes in the crypto market, in March, Bitwise Asset Management estimated the futures market to account for around 35 percent of bitcoin’s volume in early March.

This is good news because it means CME— a regulated, surveilled market— is of material size, which important for an ETF. pic.twitter.com/pVqMqPSZkt

If the futures market opens with a strong fear of missing out (FOMO) from investors that observed the parabolic rally of the dominant cryptocurrency over the weekend, it may serve as a potential near-term stimulus for the asset.