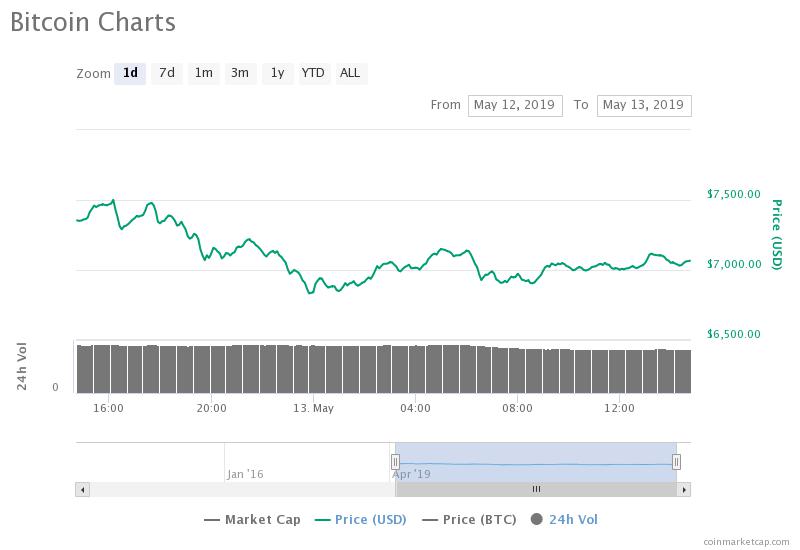 By CCN: In the past 24 hours, following an intense 25 percent rally within a seven-day span, the bitcoin price has slightly retraced to around $7,000 from its peak at $7,500, by nearly 6 percent.

Several technical analysts expected a minor retracement to occur as the bitcoin price surged from $5,000 to $7,500 in a relatively short time frame, demonstrating a parabolic upside movement.

The bitcoin price has dropped by more than six percent in the last 24 hours in a slight correction (source: coinmarketcap.com)

Although technical indicators of bitcoin have portrayed oversold conditions subsequent to its strong rally, the momentum of the dominant cryptocurrency may allow the asset to sustain its positive trend in the near-term.

Why a Large Retracement is Unlikely For Bitcoin

Speaking to CCN in an interview, a cryptocurrency trader known to the community as “Satoshi Flipper” explained that it is sensible to expect bitcoin to retrace slightly in the short-term coming off of a $2,000 movement in less than a month.

The trader said that he has been vocal about a potential bitcoin retrace, which would be healthy for the asset, but does not see it dropping to the $4,000 region as some have claimed.

“I’ve been definitely vocal about a healthy BTC retrace, but I do not believe it will be a drastic 30% retrace back into the $4k’s. Once we form a local top, I believe we will 10% at the most, then settle down sideways,” the trader said.

On May 12, bitcoin experienced a six percent sell-off from $7,500 to $7,000 and has slightly recovered to $7,080. It remains uncertain whether the asset’s full retracement has concluded but after a slight correction the trader added that the alternative cryptocurrency (altcoin) market is likely to rebound.

“That is when we’ll have a real altcoin season that everyone is expecting. Upon the immediate retrace, altcoins will take a small hit, but then when BTC settles down sideways, altcoins will rebound in a huge way,” he noted.

Alex Krüger, a global markets analyst, said that he did not expect bitcoin to undergo a strong correction as it surpassed the $7,000 resistance level with strength and eventually hit a new 2019 high at $7,585.

The asset was met with a retracement, a near-term movement that is seen by many traders as an ideal step back in establishing necessary fundamentals for the next potential upside movement.

“Sanity reigned in over BTC overnight, correcting 11% lower. Yesterday’s move above $7000 had started making many, including me, doubt that a strong correction would ensue anytime soon. Cognitive biases can affect all of us,” the analyst said.

With a relatively large retracement already in place, analysts generally do not foresee a substantial plunge in the bitcoin price below the $6,000 mark.

However, it is important to note that prior to the correction of bitcoin on Sunday, the Relative Strength Index (RSI) demonstrated oversold conditions.

With the “real 10” verifiable daily spot volume of bitcoin over $1.8 billion and the interest in cryptocurrencies, in general, on the rise, an ideal movement for BTC would be a gradual climb towards major resistance levels.