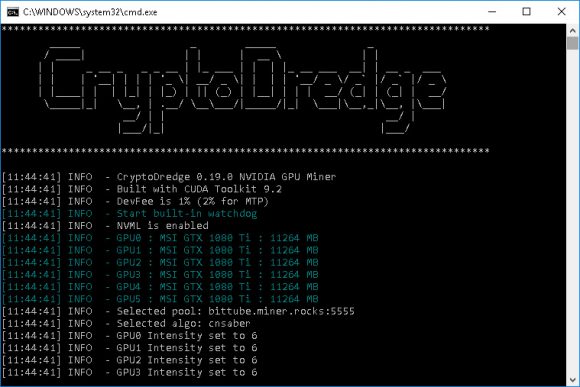 
Here comes CryptoDredge 0.19.0 and it brings along support for a new algorithms – Argon2d (250/4096), as well as improvements for the MTP, CryptonightGPU and CryptoNight-like algorithms. The previous release CryptoDredge 0.18.0 has introduced support only for the argon2d-dyn only. The new version also removes some obsolete algorithms and introduces some minor fixes to further improve stability and usability of the miner. Some users are reporting nice performance boost for CryptoNight-based algorithms on some Nvidia GPUs, so you might be interested in giving CryptoNight a go with the new version, not much of extra performance for MTP though.

Do note that the CryptoDredge miner supports only Nvidia GPUs and is a closed source software that comes with 1% built-in developer fee for all supported algorithms, however the dev fee is 2% currently only for MTP mining (Zcoin), there are binaries available for both Windows and Linux (CUDA 9.1/9.2/10.0).

– To download and try the latest release of the CryptoDredge 0.19.0 Nvidia GPU miner…