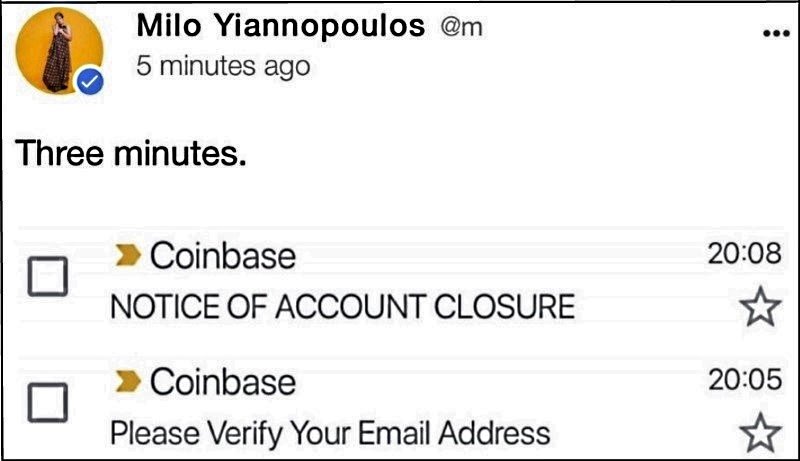 By CCN: Bitcoin evangelists’ silence in the face of Coinbase banning gay Jewish conservative activist Milo Yiannopoulos is deafening. Their refusal to condemn the ban undercuts the myth of crypto as a foil to traditional banking institutions.

If anything, bitcoin bros’ collective silence suggests that the crypto community is little more than a cheap knockoff of the corrupt financial establishment they brag they’re rebelling against.

On May 3, Milo said he was banned within three minutes of trying to open an account on Coinbase, the largest cryptocurrency exchange in the United States. No reason was given.

Moreover, Coinbase has yet to return CCN’s emails and calls for comment on this story.

Obviously, Coinbase is a business, and it has the right to ban whomever it wants. But a leading crypto exchange banning a man simply for his political beliefs has shades of tech totalitarianism.

Yiannopoulos is a controversial British media personality who was a former editor at Breitbart. He has been branded a “far-right extremist” by the left-wing media for condemning political correctness.

To be clear, many people find Milo obnoxious and offensive, including this writer. But to deplatform a non-violent individual simply for his political beliefs is laughable — and tragic.

In February 2019, Chase suspended the account of Iraq War veteran Joe Biggs without notice or explanation. His apparent crime was that he’s a vocal Trump supporter.

“After about hour and a half on the phone, I wasn’t able to talk to anybody and get a clear reason as to why they closed my account,” Biggs told One America News correspondent Jack Posobiec.

Amid heavy backlash on social media and a barrage of phone calls from outraged veterans, Chase later offered to restore Biggs’ account. But by then, he decided to take his business elsewhere.

Chase also suspended the bank account of Jewish conservative activist Laura Loomer. Loomer has also been banned from PayPal, Facebook, Twitter, and from the ride-sharing services Lyft and Uber.

As CCN reported in April 2019, Milo Yiannopoulos was banned from Facebook during the social media monopoly’s mass-purge of conservatives. Others who were banned include:

So who’s next? And why is the cryptocurrency community now hopping on this tech censorship of conservative? Isn’t that antithetical to what crypto is supposed to be all about?

And if Milo Yiannopoulos is too dangerous and extreme to be allowed to buy bitcoin, then why is the Palestinian terrorist group Hamas allowed to beg for bitcoin donations on Facebook and Twitter, where they foment violence and recruit other terrorists?

Republicans are more pro-bitcoin than Democrats

The comical irony of the “Left-Wing Crypto Bro” is that Republicans are far more pro-bitcoin than liberal Democrats, who want to regulate crypto into the ground.

Trump’s threat to eliminate “due process” is a threat to confiscate the assets and freedom of citizens while denying the legal recourse to prove citizenship. There is no perfect defense against tyranny, but having assets that are resistant to confiscation helps (cryptocurrency.) https://t.co/AWrMIqbTo1

2/ With Trump running up the deficit massively, asset forfeitures from convicted Trump family and friends is maybe how he intends to subsidize government operations?

While influential bitcoin bros constantly pump bitcoin to boost its trading price, it would be nice if they also promoted an open, non-discriminatory crypto community.

Bitcoin doesn’t care about your politics, religion, or technical analysis.

The US government shut down.

No matter how hard someone tried, they would never be able to shut down the Bitcoin network.

Bitcoin doesn’t care about your politics.